One of the big issues with various Audi DSG gearboxes has undoubtedly been the mechatronic unit. While there were improvements made from 2012 on, it continues to be a concern with owners. This is particularly true of the Borg Warner DL501 which as far as I know, can be found in cars dating back to 2009, 2010.

It’s a fairly complicated, complex device which, in the past, was replaced as a whole unit. Audi has made several updates over the years and they have become more reliable. The newer the gearbox, the more reliable they seem to be. There was a major improvement post-2012 but there are failures seen on various Audi models from the A4 to the S7. The DL501 is found in the A4, A5, A6, S4, S5, RS5, S6 and S7. There are minor differences in each model from the clutch flywheel to the clutch plate size and internal gearing on the mechanical side.

Audi uses a liquid to liquid transmission cooler for the ATF side on most models and years. The cooling liquid is the radiator coolant. It works to heat up the fluid and then cool it once the internal fluid becomes hotter than the radiator coolant. Personally, I find it to be woefully inadequate and it doesn’t allow the clutch cooling circuit to shed heat fast enough and tends to run the ATF fluid at a high enough temp that there’s not much margin between adequate performance and overheating safeguards.

The mechatronic has numerous solenoids and sensors. Here are a few and what they do.

There are two PCB’s and one electronic module which is, I’m assuming, the main TCU for the transmission. All are internal and cooled/lubed by the ATF fluid circuit.

A few photos to make this all clear… 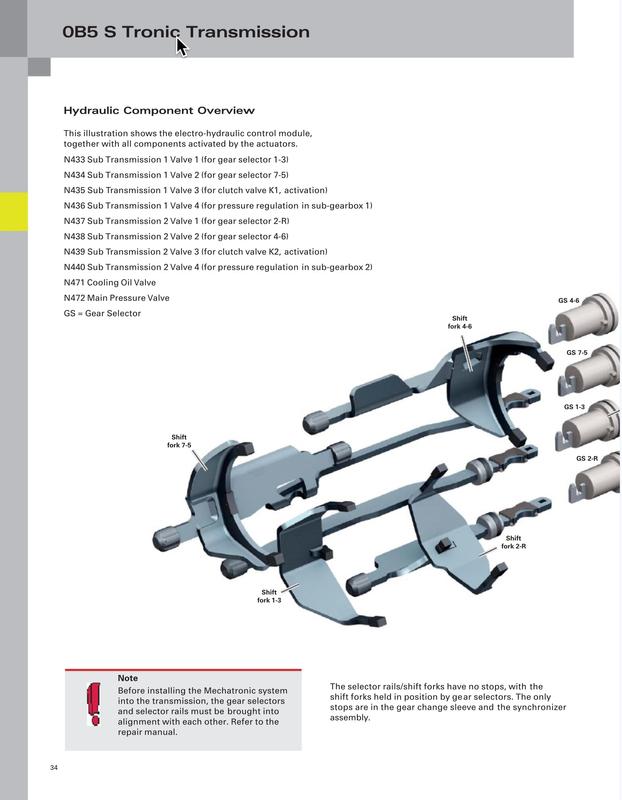 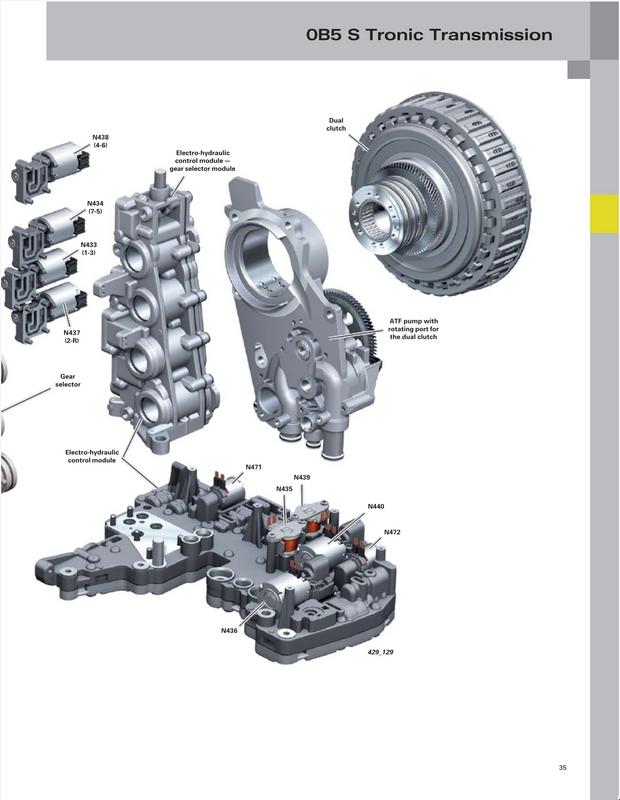 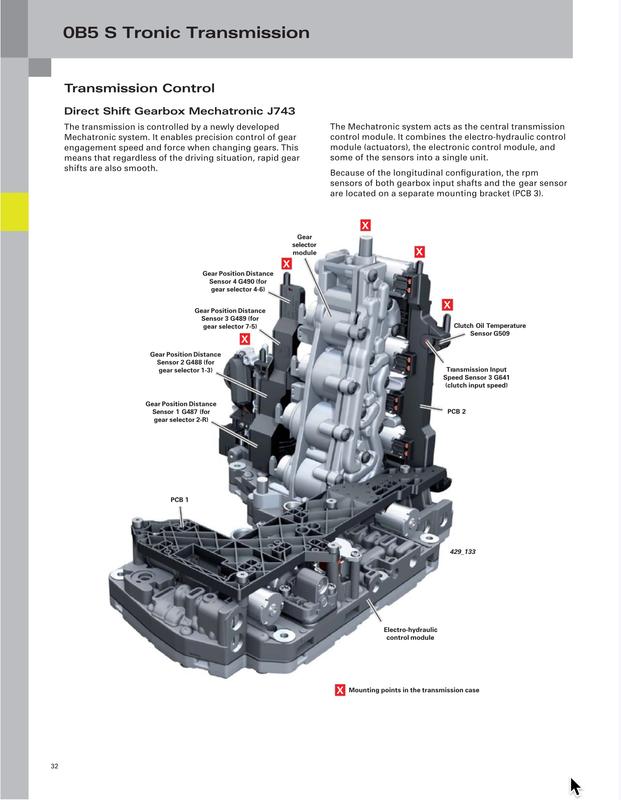 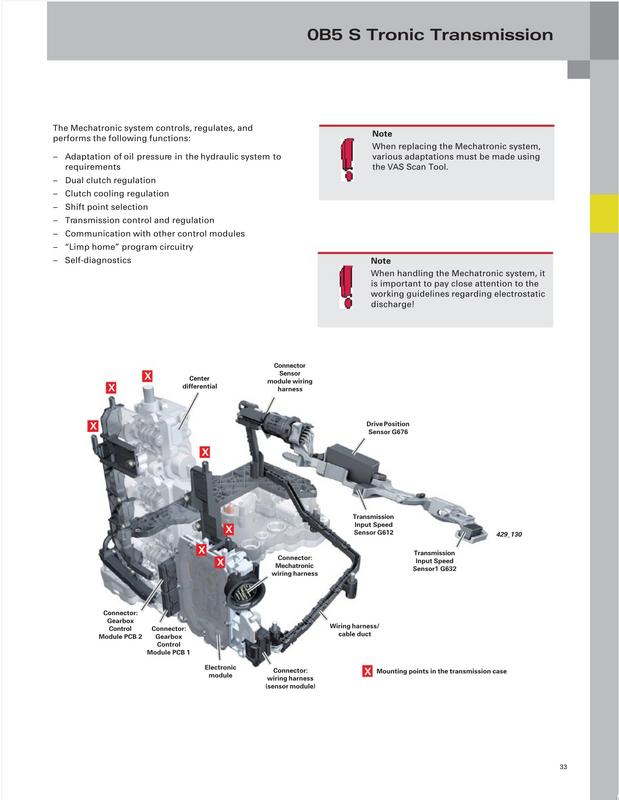 I’m going to post the entire PDF in order as it’s a great reference and a good start to learning about the internal components on the DL501. 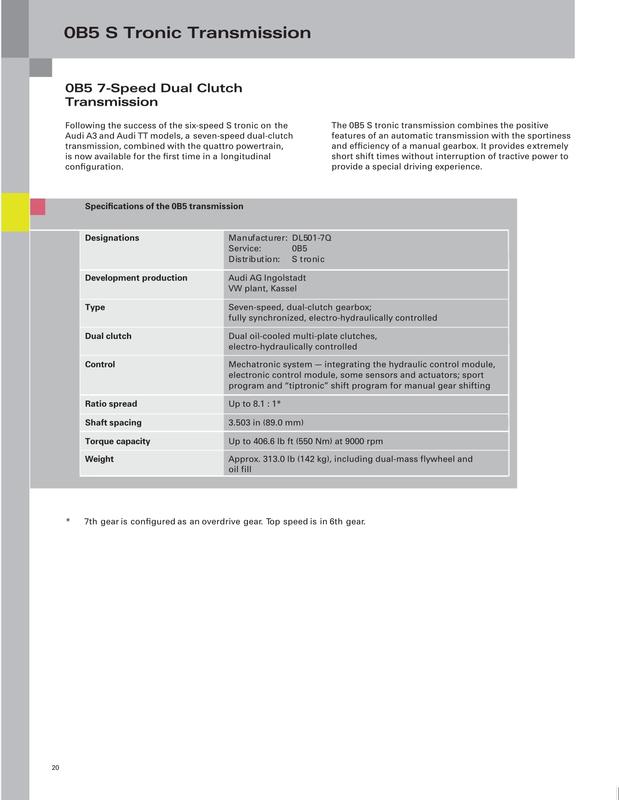 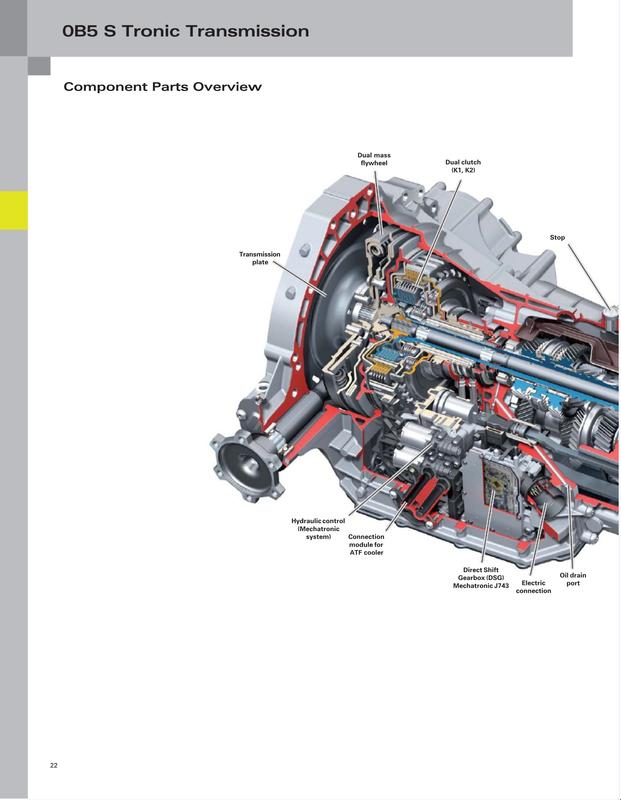 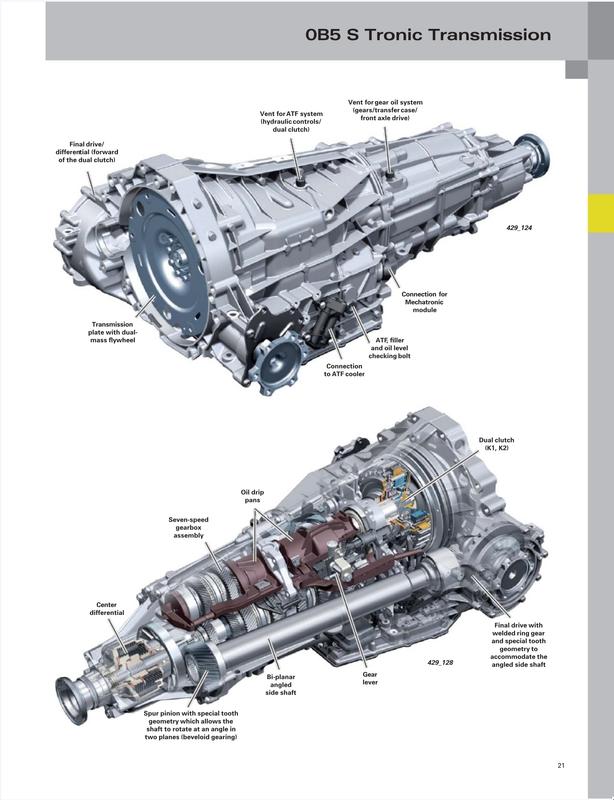 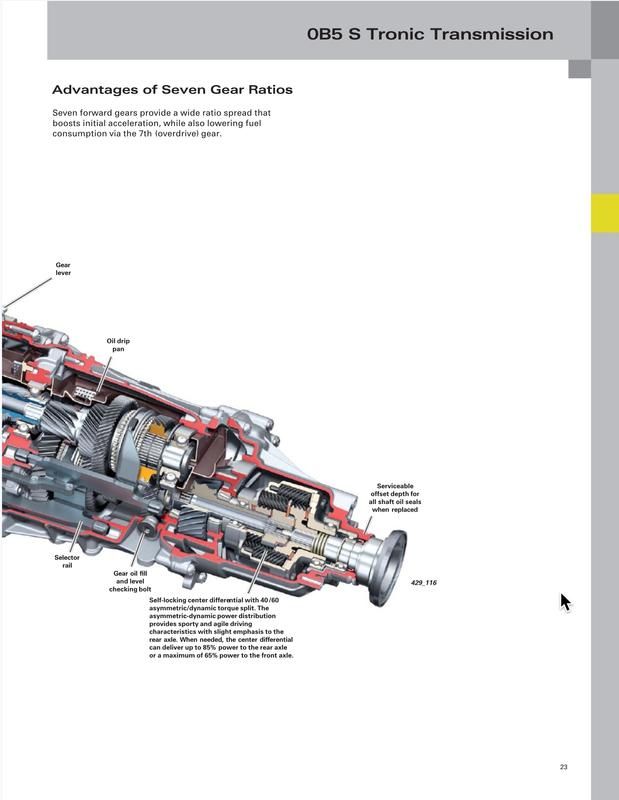 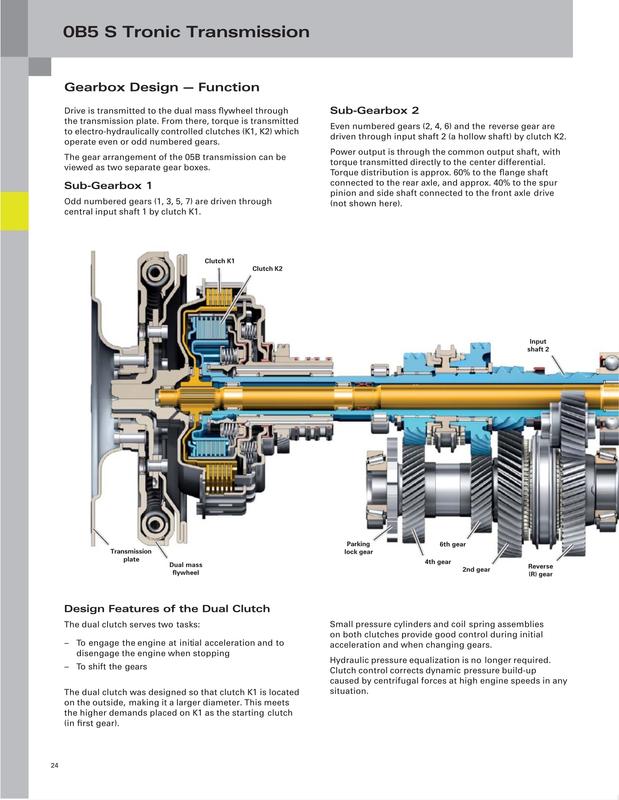 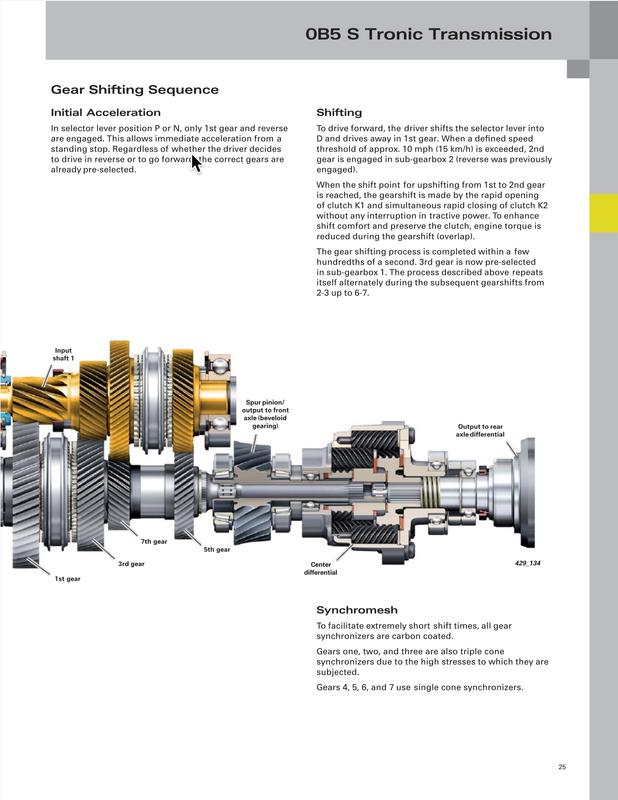 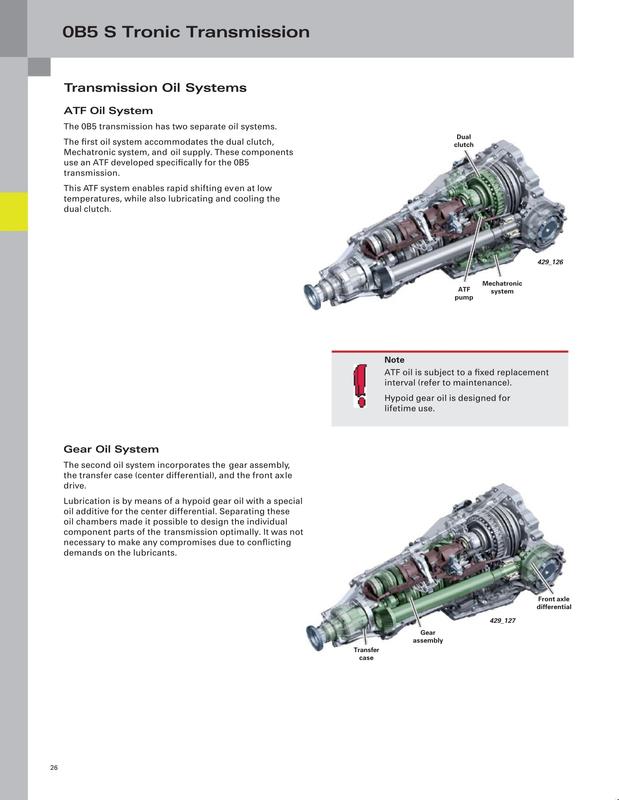 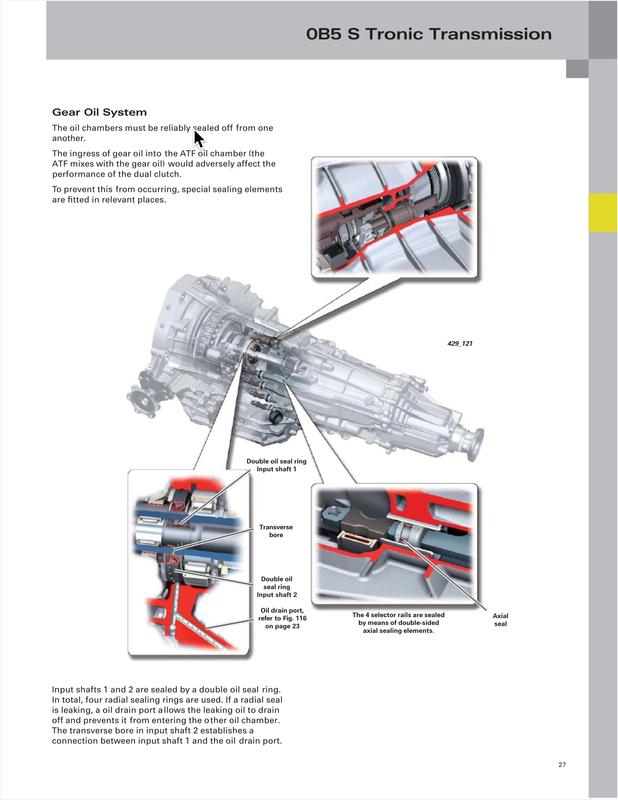 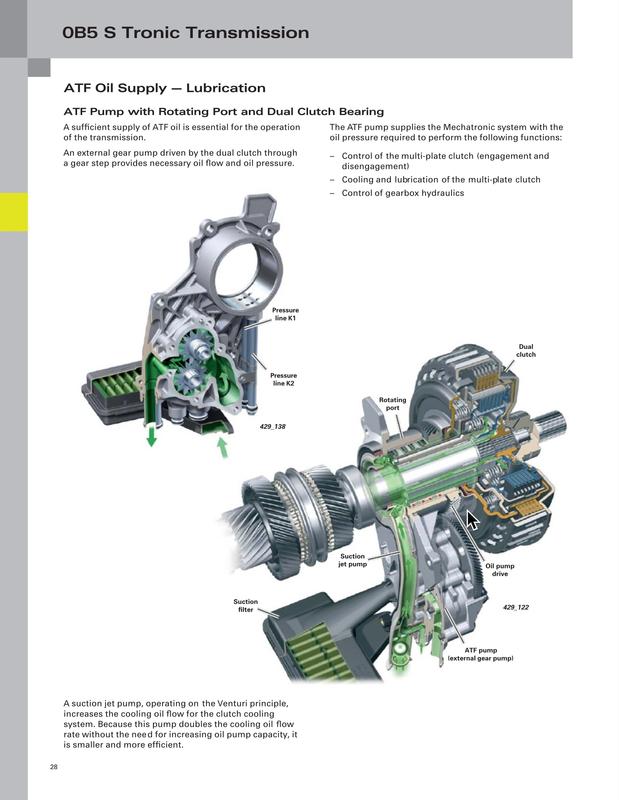 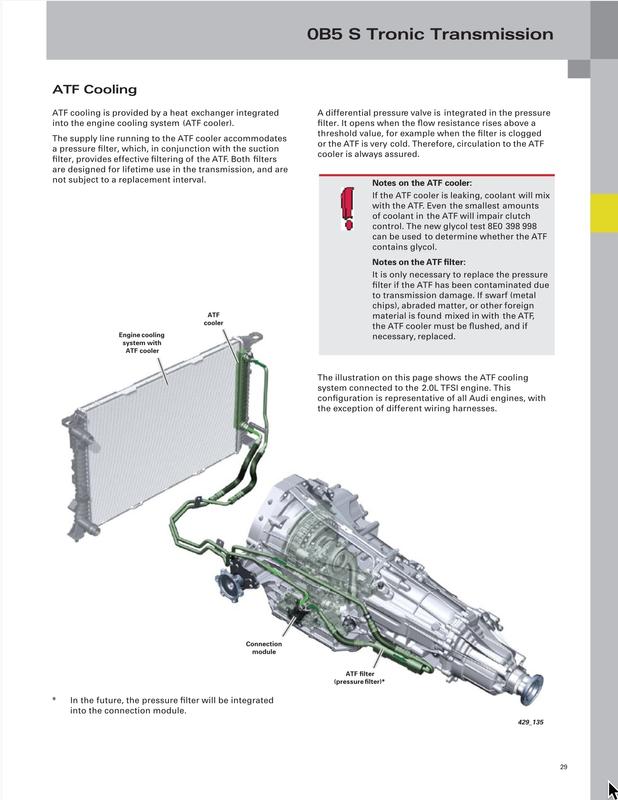 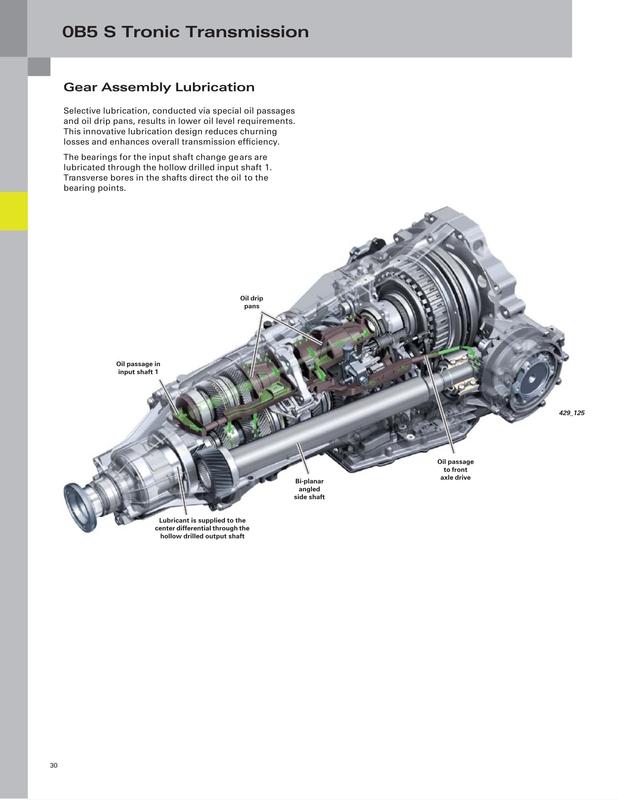 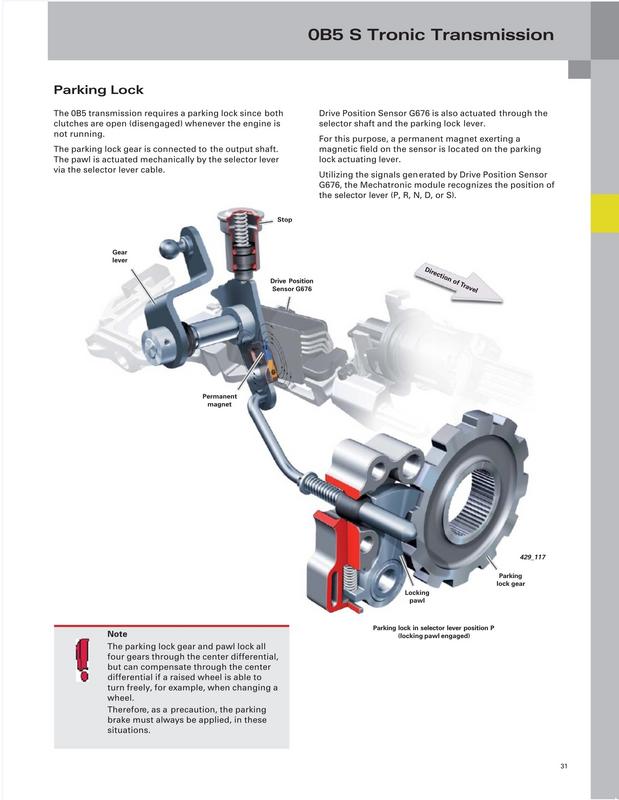 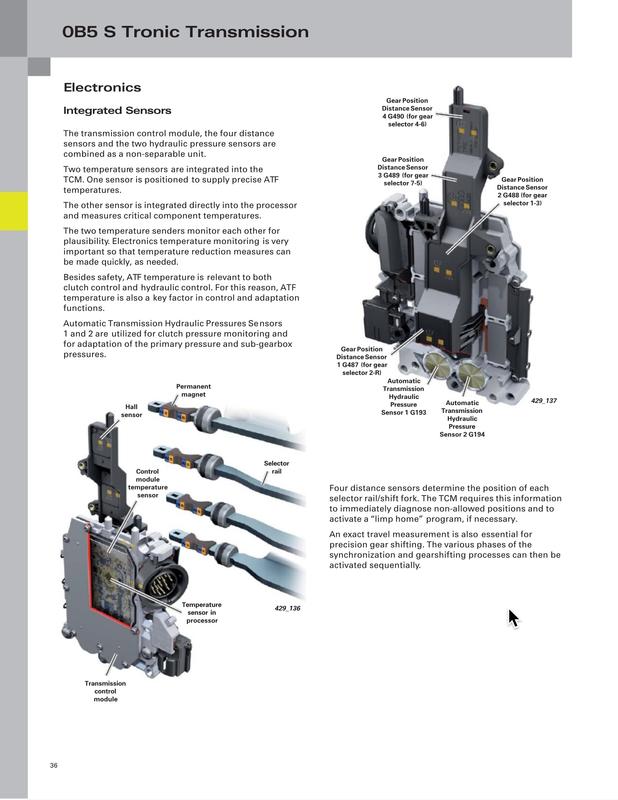 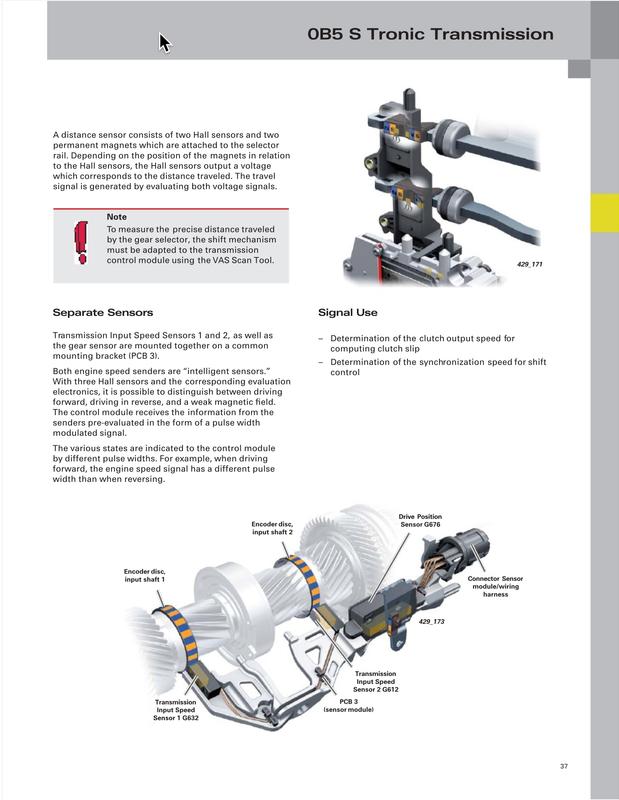 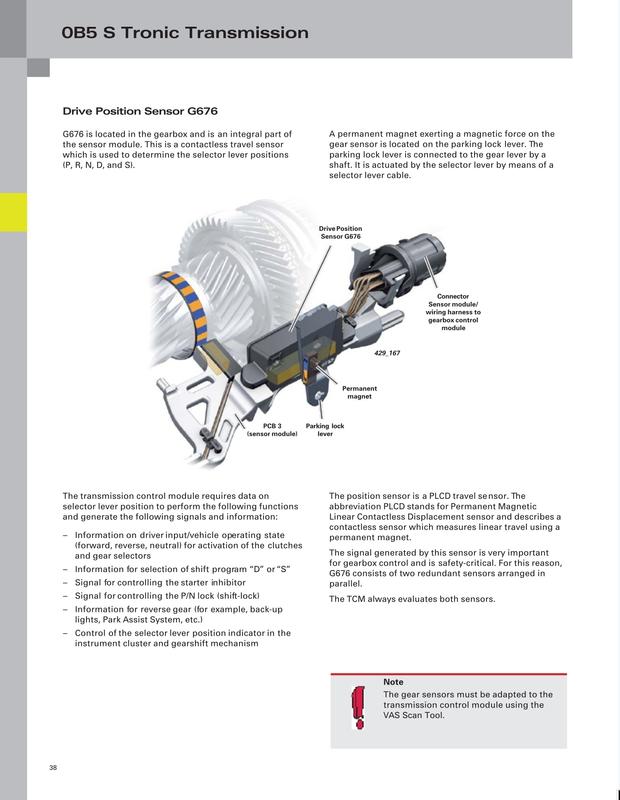 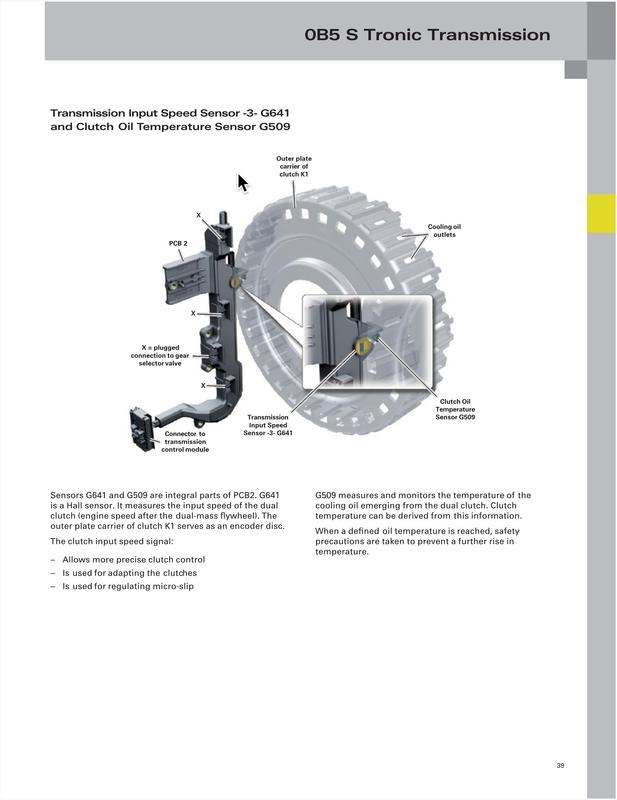 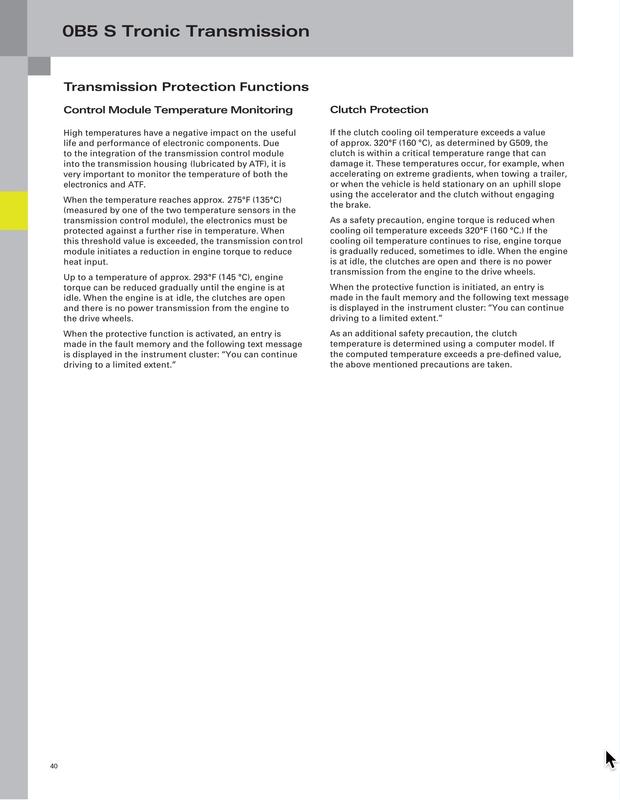 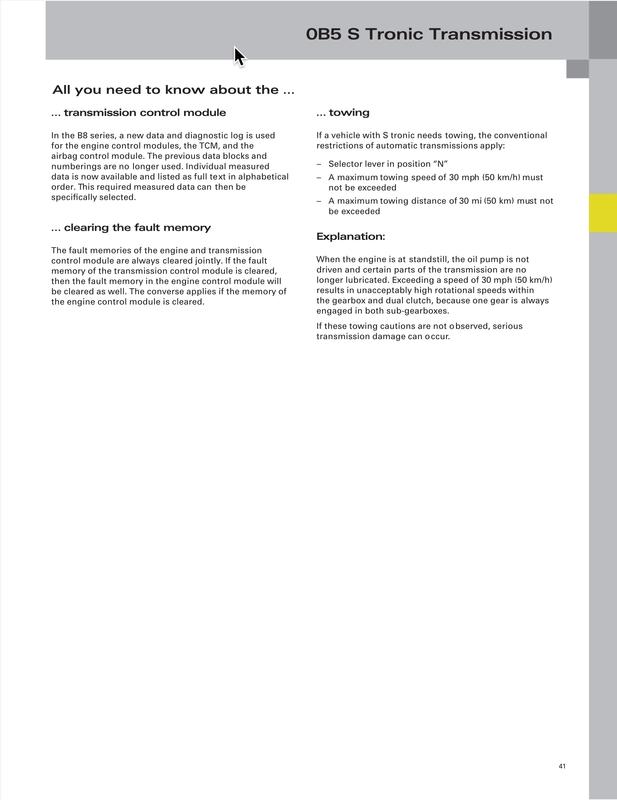 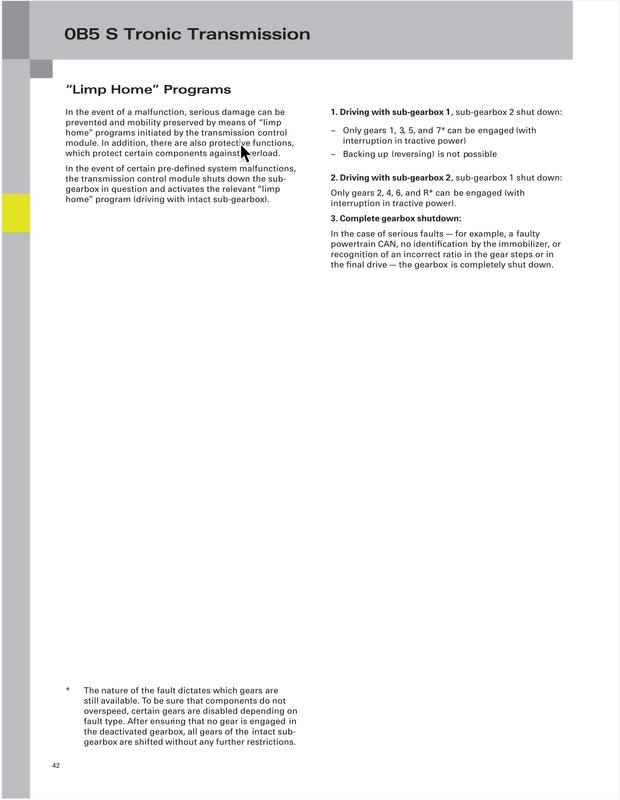 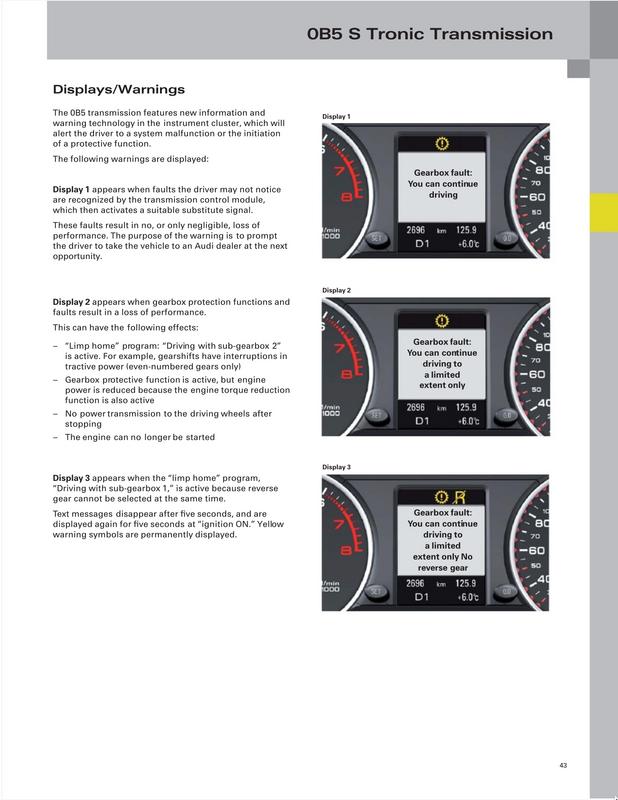 So Oleg over on the “other” forum installed a new clutch pack not too long ago with more aggressive material. He’s now reported the drivability is the same as OEM and all it took was running through adaptation three times (at various mileage points). The idea is to increase the friction coefficient which allows the overall internal pressure to be reduced. Less chance of introducing shifting glitches due to unstable line pressure. Need to find the link to the shop in Europe but I’m willing to bet they’re commercially available friction discs from someone like Exedy.

Ok, came across this post via Google, originally from the “other” forum…

This is some good information!

Ape Factory, can you PM me? I attempted to PM you but wasn’t allowed… probably because i’m new.

Did you replace the mech and electronics yourself or did a shop do it? Did you code in the new mechatronic and run through adaptation with a Ross Tech VCDS? And it’s ok to mention Audizine here, I’m on both sites but am pretty much hanging out here nowadays as they’re far more supportive here and they don’t take funds from vendors. So less politics!

I was the one who installed the parts, and only installed new solenoids and the 2 boards, not the entire mechatronic unit. Do i need to code anything for the new solenoids? i’ve heard of others just installing them and driving away.

I attempted to run it through an adaptation with VCDS, but it wouldn’t go because of my error code.

I have the mechatronic back out of the car, and checked the Ohms on the new parts,

I want to put the old solenoids back in place, and reassemble to see what happens… but i don’t want to keep taking the mech in and out.

Ha, i like the idea of less politics! I don’t see a lot of recent post for the B8 S4

In regards to the solenoids and coding, that’s a really good question. I would think you’re good since the TCU wasn’t replaced but I could be wrong as I haven’t gone through the procedure myself. I’ll take a look at the PCB replacement steps in the factory service manual and see what they say.

I’m assuming the current errors are not the same errors that prompted you to pull the mech and fix it.

On the ohms, I would think they need to be in spec in order for them to operate properly or at all. Half an ohm more resistance may be the difference between functioning and not functioning. I’d contact the vendor and see if they can advise on that front (or even Borg Warner themselves).

I would think that one bad solenoid would cause multiple gear issues though, not just reverse as it shares a shift mechanism with 2nd gear.

So you can’t clear the codes and then dive into guided functions?

Reading through the FSM now and honestly there are many thing which could have gone wrong with the installation of the solenoids or the PCB (circuit board) so it’s tough to say.

The fact you have the TPMS error leads me to believe the error is electronic in nature but it could be normal to have a TPMS error based on the fact every time I flash an ECU/TCU, I too get a TPMS error which goes away within a mile of driving. Perhaps disconnecting the battery and fully discharging all of the electricity in the system while replacing the PCB does the same thing.

Forgot to mention…on the S4 section of the forum, I’d suggest inviting people over to it whether it be on a Facebook group or Audizine. Just do it quietly on Audizine, LOL. This is a far better site for good technical discussions as we don’t have to worry about stepping on the toes of vendors who pay to advertise on the site. In the end, it all comes down to money.

Oh and glad to have you on this forum. Please keep updating us any knowledge you share may be extremely beneficial to others. The more problems we can solve ourselves, the larger support base there will be for our cars.

Can you explain this a bit more? I didn’t adjust anything to a specific distance/length…

I attempted to reset everything and jump back in, but the computer caught it before I got a chance to address anything.

I watched the video you shared in another post on TCM repair, i’m going to open my up and look for broken connections. I believe our mech units use a torx screw to secure a lid instead of a hard fused plastic like he showed.

I’m going to reach out to the vendor and ask about the ohms they’re supposed to be at. Not sure how to get into contact with anyone at Borg Warner…

honestly, i thought about just driving the car for a few miles and see if it clears up… you know, hope for something like a hydraulic pathway that wasn’t primed get primed from extended use? Don’t want to for fear of fubar.

Do you have a copy of the factory service manual? If not…send me a PM if you’re able. Scratch that, I’ll just send you one. Give me a few.

Let me see if I can track a contact down at BW but I suspect you’d have better luck just reaching out to one of the vendors who sell replacement solenoids since BW is in Germany.

Ok, here’s what i found in the "servicing-7-speed dual clutch transmission, page 25.

Believe this to be my issue. my solenoid for reverse was pretty much all the way in.

Yep, that’s exactly what I was referring to. Fingers crossed on my end as well!

This time it’s still saying not confirmed, but still no reverse.

OF COURSE… upon finding the distance wan’t correct, i installed all of the new parts.

Ok, so when it goes into limp mode for the transmission, does it take away gears? Since the car wasn’t on jackstands, i drove it around the neighborhood. It’s like it only catchs 2/4/6 gears.

That makes sense as 1/3/5 use a different solenoid. I’ve only gone into full-on limp mode once when I was running a very very beta TCU tune and experimenting. I could not accelerate rapidly at all, the car was a slug, like I was driving through molasses. Pulled over, turned the car off and back on, protection mode went away.

When clearing codes, sometimes you can’t do it globally but have to go into that module and clear it.

I’d try that and then run through the guided functions (adaptation) if it’ll let you.

I’ll try it and see. Perks of where i’m currently at… the 176A is “not confirmed” so it might go away once re-cranking? My mind is allll over the place on this. I’m almost ready to drop it at the dealership, but then i’m also on the fence of shipping it off for rebuild at this place i found in NYC.

There’s also a place in Chicago which rebuilds mechatronics as well. What part of the country are you in?

You could also probably call Sonnax and they may know the most qualified places since they sell many of the replacement parts for the Mech. https://www.sonnax.com

And when you have it sorted and want to look into a transmission cooler, here’s a video I did explaining most of the details.

Ok, attempted to clear the code and adapt since it’s not confirmed. No luck. No luck with driving it, the limp mode makes it undrivable.

I’m drawing a blank. Now that I know i have to have the hooks a set distance, i’m wondering if i have missed something else, or is one of the new parts is actually defective.

If i understand all of this correctly, i’m looking at gear position 1 (the lowest of the solenoid) and i’m not sure what other part.

I opened it back up and the hook was back into where I pulled it out from.

Do you think I should reprogram is as a new mech unit?

Wondering if reprogramming is your answer too…I was reading up on the battery management system and it actually stores up to three battery changes. If it does that for the battery, what does it do for the mechatronic?

My initial reaction was no, shouldn’t have to as the TCU hasn’t been changed but you did change the PCB board. So maybe that’s it along with running guided functions. Since the solenoids are new, their ability to maintain pressure and pressure curve are probably different and maybe (?) the TCU compensates for wear over time? Now it’s so out of whack compared to what the TCU is expecting that it can’t compensate. Just a guess on my end.

Issue Resolved: Fairly certain issue was solenoid N437 for 2nd/R. Pulled mech unit back out of car and realized that the solenoid was around 20mm too far in, compared to where it should have been. Replaced solenoid with one of the original ones, reset distance and double checked the forks were in nuetral.

Test drove without any issues (except residual fluid burning off). Initial thoughts after ~10 miles is it shifts smoother and the once issues have been resolved. Time will tell.

Now we’ll see if the parts hold up!

Thanks AF for all of your assistance, it was greatly appreciated. If you’re ever in Virginia, hit me up and i’ll buy you a beer.