Starting a new thread to detail best maintenance practices (above and beyond factory recommendations) as well as listing known issues and various items to look out for.

I don’t want to list every single thing that has gone wrong on an RS5 but I would like to create a list of some of the more important components that may have gone bad, what the symptoms were, the diagnosis and how it was fixed.

For example, if you had an injector go bad, list the symptoms, the codes pulled, and then how it was ultimately diagnosed (dealer or yourself) and what the fix was. This’ll make the thread a bit more useful for those trying to track down correlations and actual fixes.

Keep it short and concise as possible and I’ll continue to edit the initial post with lists of known problems. I’ll reference and link to your specific post making it that much easier to filter through irrelevant information. Make sense?

Next I want to try and promote the concept of performance maintenance, maintaining the car at or near the peak performance it’s capable of. This becomes more extensive as the car ages and will include components Audi doesn’t mention in their service intervals.

First and foremost, every RS5 owner should own a Ross-Tech VCDS. They’re relatively inexpensive and a real lifesaver when it comes to not only pulling diagnostic codes, but custom coding the car, helping to perform various maintenance and repair functions and even monitor the car’s parameters in real time.

RS5 Performance Maintenance
While you can go with longer intervals than what’s listed below, and following Audi’s specified maintenance schedule, the below will help maintain your car’s peak performance and may stave off future reliability issues.
-Carbon clean the intake valves every 35,000 miles
-Change both the ATF and MTF fluid on the transmission and differential for each specified maintenance interval by Audi. Some services call for one fluid only. Just change both, particularly the ATF fluid.
-Replace BOTH the external and internal ATF filter each and every fluid change. This is now standard practice at Audi but an Indy shop may not know this,
-Oil and oil filter changes every 5,000 miles. Do not go 10,000 niles between oil changes
-Spark plugs every 25,000 miles maximum
-Fuel injectors. Monitor misfires with the VCDS and consider replacing all eight with new ones at some point. They don’t seem to fail consistently at a certain mileage but if you’ve made it to 60,000 miles, take a hard look at injectors.
-Coils every 60K miles.
-Check front upper control arm bushings every tire rotation. It’s easy enough to stick your head in the wheel well and look at the bushings.
-More to come

Reliability issues. Now that I’ve spent a good time with the RS5 I can boil everything down to two main issues.

First, unsurprisingly, is the mechatronic. Not all go bad and it’s damn important you stick to the 20K mile intervals for the ATF fluid. Actually ALL Audis using the DL-501 S-Tronic should be swapping their fluid that often.

There are several things which can go wrong inside the mechatronic, some having to do with the PCB that’s housed inside, some having to do with solenoid and thermostat wear. It’s a complicated piece and not always easy to diagnose. Audi has, in the past, simply replaced entire gearboxes but there are now individual components available through Audi or other vendors.

The second big one is injectors. Like the transmission, the RS5 injector is used in about 20 different models. When they fail, they tend to fail catastrophically in short order and can cause hydrolock while dumping copious amounts of fuel into the combustion chamber.

I recently had my #3 injector fail which threw the appropriate code P03030 and also triggered cylinder deactivation. Visually, the injector looked fine but obviously wasn’t. I decided to just change them all out at the same time. I was at about 62,000 miles at the time. Way too early to have an injector fail. It’s not the first time I’ve read of it happening on an RS5 however.

The other known issues are all somewhat less severe, not very common or easily fixed. There are exceptions and “problem child” cars which seem to have never-ending issues. They’re the outliers and overall I still consider the RS5 to be a very reliable car given its level of performance.

Other Known Issues
There are many small issues which have since been rectified on most if not all cars. This includes things like the fuel door actuator failure or rear wings which don’t fully retract. There were TSB’s and recalls and most were fixed under warranty.

Suspension Bushings-Suspension bushings are known to tear or go bad, especially the upper control arm bushings. These can be replaced by the owner and new bushings are around $12 each. It’ll cost you 10X that to have the dealer replace them.

Carbon Buildup-Excessive carbon buildup can most likely lead to the creation of other issues. The only way to solve it is to periodically have the intake ports cleaned mechanically by using walnut shells or physically scrubbing with chemicals. All direct injection engines suffer from this.

PCV Failure-The RS5 has two PCV valves with a rubber diaphragm that can tear. For what they are, they’re reasonably expensive to replace. Luckily, someone is working on a replacement rubber diaphragm so the whole unit isn’t being changed out.

Brake Discs-The cars equipped with the iron rotor setup have, in the past, suffered from rapid wear that seems to be an issue with US cars only. Solved with aftermarket brake pads and/or new aftermarket discs.

Cam Sensors-These are very inexpensive to fix with a replacement sensor being around $40. Fairly easy DIY too, especially on the intake side, a bit harder on the exhaust side.

Rear Differentials-These are expensive pieces and there were a few failures in a short period of time on multiple vehicles right after being serviced. I personally think they all were serviced incorrectly. I’d consider it very rare and very unlikely that yours will break. I’m a regular at the drag strip and in the canyons and haven’t experienced any issues. I also service it myself.

Thermostat-Again not super common but it does pop up from time to time and seems to be a minor issue across the “5” platform. It can be swapped by the DIY’er who has mechanical ability. The whole thermostat housing gets replaced with the thermostat so the part is a bit more expensive than your run of the mill $7 thermostat found in your 1984 Camaro. It’s an electronically controlled thermostat meaning the ECU has control over when it opens and closes.

If you own an RS5 without a warranty, and plan on doing most of the maintenance yourself, I highly suggest your first “mod” is the purchase of a Ross-Tech VCDS. This is a cable/software package which interfaces their PC-based diagnostics and coding software with your car’s OBD port. It’s priced at $199 with three licenses, meaning you can use it on three different Audi vehicles. They also offer an unlimited license version. This device is far more powerful than the typical OBD port/smart phone devices and you can run adaptation sequences, custom coding, diagnostics and logging in real time, etc…It’s not always the most intuitive interface (It’s Windows-based so enough said!) but it is super powerful and highly useful day in and day out. No affiliation, just a happy user. https://store.ross-tech.com/shop/vchv2_ent/

You will need a PC or a Mac with a partitioned drive and Boot Camp running Windows.

My first error code did not appear until 62K miles approximately.

I started feeling a slight stumble at idle and I whipped out my VCDS to record cylinder misfires. I noticed cylinder 3 had a high number of misfires, higher than any of the other injectors and via live monitoring, I could see the misfire count increase in real time.

I then did a full scan of the vehicle and I came back with the following codes:
P0300 -Misfire Detected
P0303-Misfire Detected Cylinder 3
P3400-Cylinder Deactivation Bank 1

I’ll need to double check that last code but I did have cylinder deactivation where the ECU stopped the #3 cylinder’s injector from firing. I could drive the car and it seemed to run fine but the miss was present at idle.

I always do the least expensive check first. In this case, I swapped two coils to see if the misfire changed cylinders. It did not.

I then pulled all the plugs to check each one for anomalies. Plug #3 seemed to have a small degree of more soot but nothing abnormal looking.

At this point I was pretty sure the injector had failed. DI injectors, from what I’ve read, tend to fail suddenly and catastrophically. I had a non-catastrophic failure which seemed to be a leaking injector at idle. Others have experienced total injector failure and hydrolock.

Looking at my VCDS scan (I’ll post a screen grab later), I could see I had additional misfires on some of the cylinders. I decided at that point to order an entire set. I know I’m keeping the car and I want it to have a long and happy life.

New injectors come with all new seals, both the bottom teflon combustion chamber seal, and the top o-ring/shim. They’re ready to slide right in after you clean the bores. 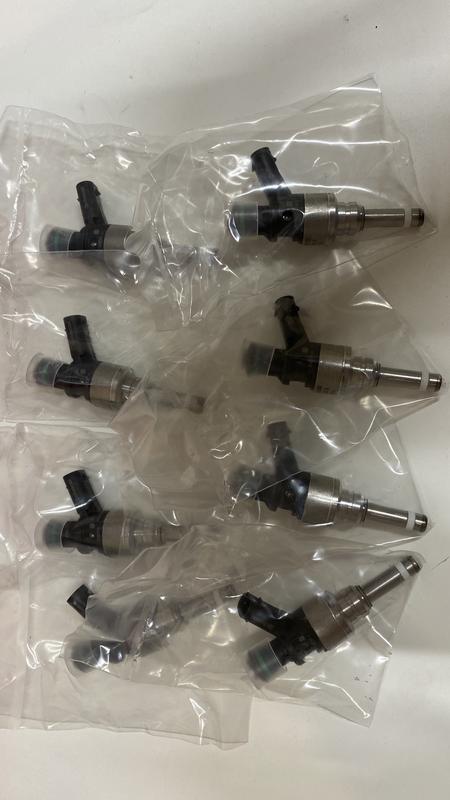 They’re marked as being a Continental product and made in Italy which might explain their reliability issues, LOL. 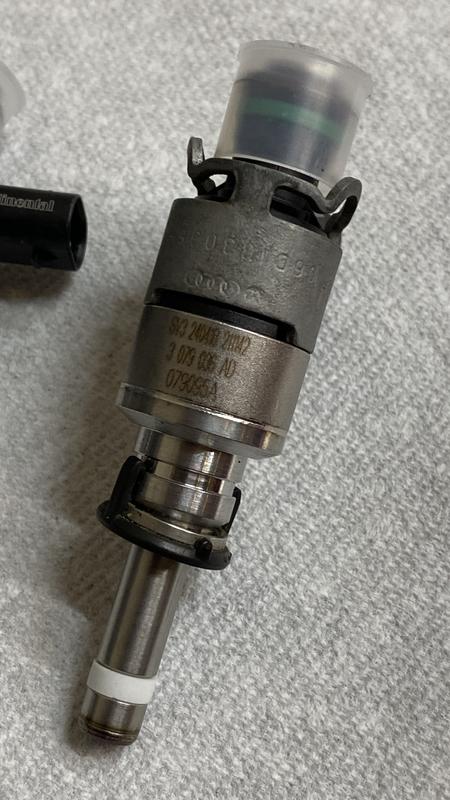 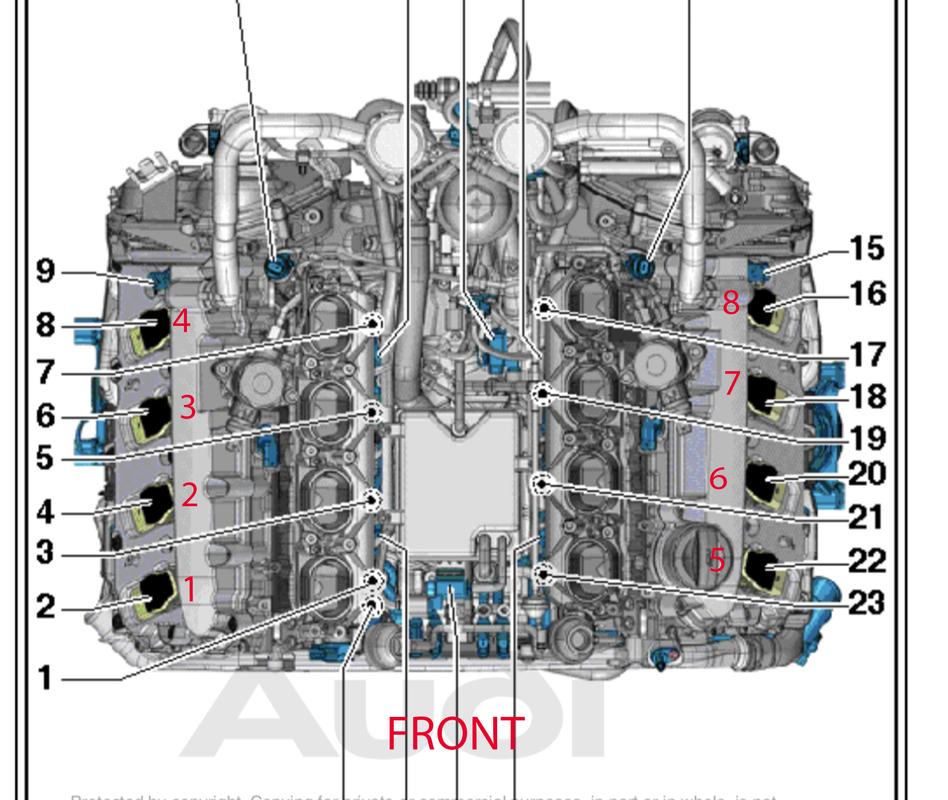 This is what my original injectors looked like when I pulled them. No anomalies. 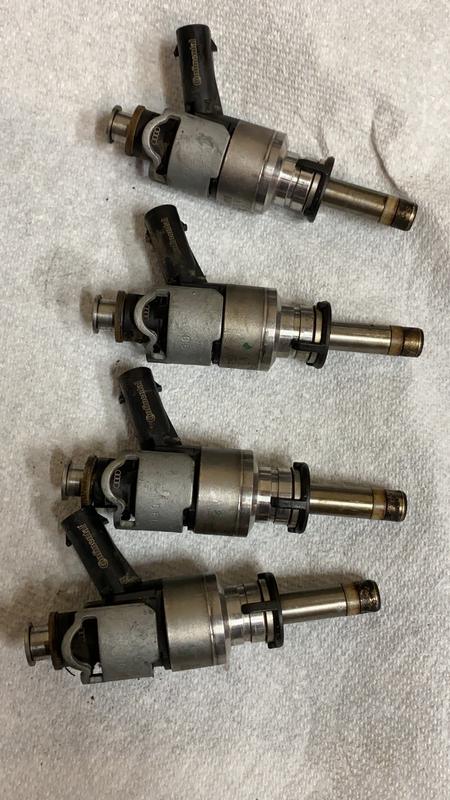 These are piezo injectors meaning they have piezo crystals which expand when hit with a pluse of electricity. This compresses the gas at a very high pressure where it gets injected into the combustion chamber. The passageways can become clogged, the crystals can crack or I’m sure there’s some sort of a pintel in the nose of the injector which can fail (probably my situation). I have not been able to locate anyone who services these injectors and tests them at operating pressure. They’re not overly expensive until you have to purchase eight of them at a time.

My ECU failed at around 6300 miles. This was years ago when I first purchased the car but it was still a headache to fix because it was at the very beginning of dieselgate. All of VAG’s US based engineers had their focuses devoted elsewhere and there were not any other ECUs inventoried stateside for two months.

Wow, that’s a REALLY bad time to have the ECU go bad! And welcome, thanks for joining.

As I get close to the end of my extended warranty (1.5 more years) I have to make sure I have some of these items looked into. My dealer is extremely good at replacing components that show any sign of excessive wear

Definitely have them go over all your suspension bushings before your warranty is up. The upper control arm bushings go bad on a regular basis on pretty much all the 4 and 5 series cars, particularly the most rearward arm. I’m about halfway through a video on replacing them.