After opening my 200,000 mile never before opened IM I saw this: 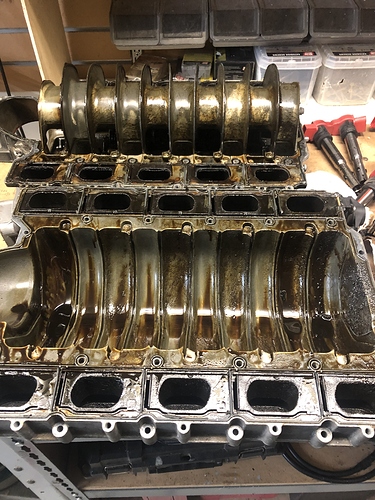 I saw a post (and a reply in my engine drop thread) about FCV, so I started researching here and elsewhere, and holy cow what a range of opinions. What I have gleaned so far is:

I am sure I have more to learn that may influence the above. As far as pros and cons, some say it’s only worth it on race cars or turbo cars. Some swear by it showing huge amounts of a watery mix with really no oil (which makes me wonder if that’s condensation created by the way the system is plumbed).

Now Justin mentioned that the oil looked unusual and that the oil creep into the spark wells may be indicative of a pressure issue in the top of the engine. I did have to change out my PCV valve a couple of years ago, so the valve may have been in trouble for a while (caught it on state inspection) and if it screwed with the pressure could have forced more oil into places you didn’t want it. The TB’s and plenum looked a little dirty but no real oil in them (which makes sense). So all of this may be the result of the valve causing pressure issues.

At the same time, my feeling is an insulated catch can system placed BEFORE the PCV, retaining the PCV system, might be a good modification, whether or not it helps with carbonization (I think it may help some, but I can’t tell if the valve design in the V10 allows exhaust gasses to build up on the intake valve as part of the piston cycle). I think it should help cut back on the oil that can make it’s way into the IM.

So, what do you think?

What I really need to know is if the inside of an IM gets oil in it with a fully functioning PCV system, since that will influence whether I try this or not.

I was appalled at the oil there and can only think that the presence of oil would have a detrimental effect on the flap system.

TIA for all responses,

Ed great thread. I think big questions that a good dose of facts can help.

Look across other platforms that use our same design of oil separator and PCV style unit. Do they have large amount of oil in the intake. Generally no but you will always see a small amount. That is going to be the function of something getting overwhelmed.

By extension of seeing oil in the intake manifold that would somewhat mean that the PCV part of the system is working and that’s a very good thing. As it’s pulling pressure out of the crank case and with that pulling oil with it. The oil is going to be an issue. But if the PCV is working and the oil separator isn’t just find out why the oil separator isn’t working or why it’s overloaded.

If all cars had the same amount of oil in the intake then I would be leaning more in the direction of the oil separator is overwhelmed and needs to be supported better. Chances are we’re all replacing or looking at these cars after 80k of use and in most cases no maintenance.

My experience first hand. Find the issue. After changing all the gaskets that will effect crank pressure and cleaning or replacing the full PCV system with a new one. I have not seen issues with all the cars I’ve worked on. Most of the cars come back for a carbon clean every 20k. And while I and most others put in the JHM intake spacers other than that nothing different. After 20k you see a properly working system.

IMHO if you have to add an oil separator or a catch can you have a bigger issue going on somewhere.

I’ll just post my answer here about the carbonization.

I cleaned the valves last year, but not to a spotless level.
I’m sorry, but chemicals and a brush does not work for me or my patience.
So I can’t judge how the free venting helped.
I’ll walnut blast it this summer and update with pictures on a more regular basis.

If I were to recommend the free venting I would recommend a catch can for both engine covers and a filter at the end.
That’s also the way im going after walnut blasting.

I’ve got an oil sample after 20000km of free venting, but getting it analyzed here in Denmark is not common, so not easy finding anyone to do it.

OK, good info. Since I am tearing everything apart, I will go the route of refreshing and cleaning and see how that goes. I think I am fortunate not to have seen fuel mileage and misfires until well after most have, so if I clean/replace I should be good for a while.

I have modded other cars I have owned, but they normally involve upgrading existing components, including hardware and software.

I will have to go through the various sources and determine what would qualify for replacement on the PCV system. If anyone has done that before a parts list would be great.

I can try to find my parts list for you with all the parts.

Just a heads up. Pull off all of the plastic PCV components hoses and lines. Connecting lines etc. The plastic PCV hoses can have small cracks in them that can be overlooked. So a deep inspection of these will be helpful. I fill each line with water after I clean them. This usually shows if there is a crack as you’ll see the water coming out.

The Oil separator hose to the oil pan can look good on one side but be brittle and cracked on the other. So also take a good look at that.

I already have ordered the two hoses that connect in the valley of the engine near the oil housing. The PCV valve is relatively new, so it would be anything else in that chain. I will look at the tube that runs between the two valve covers and see if there are any leaks as you suggest and try to ID any other piping that is involved in the PCV system and do the same.