This is easy and cheap. Cheaper than an AMI retrofit. Nice to still have AMI bluetooth on 2G MMI for your phone and a dedicated android box for this retorfit. Car will switch between the two nicely.

This last weekend I installed the analogue TV tuner bought from the UK for $35. These are now OBS so MSRP of $900 is now free.

Order the MOST splitter from China and power splitter with CAN wake or purchase seperatly. I found this deal both for $20 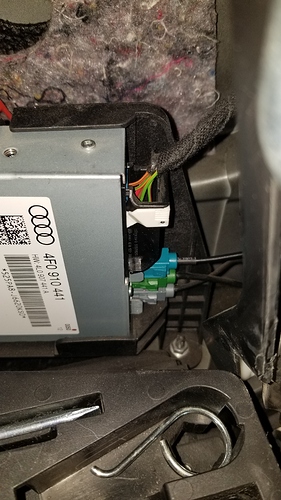 You run this cable under the plastic right where the trunk latch is. Wrap it in fabric tape if you are worried about vibrations.

I used a lot of what this person did here. He is a wealth of knowledge and retrofits. He shows using an HDMI converter to AV, it sucks. Use a 3.5mm jack to AV cable and get best results.

I just ordered the Captive Touchscreen here for $20. Simply run the USB cable from the MMI to the trunk where the android box is located to and follow this guys instructions on how to program the android box for captive touch screen. I have not yet done so but it is on order and will update when working

Do not order the HDMI to AV converter. Order an android box like this one that had AV output to RCA cables and it will be direct plug and play 480P and better resolution on the MMI

Now, this is something for the Audi folks. If your Audi is equipped with a MMI TV-module or a DVD-player, security restrictions have been applied to stop video-playback while your car is moving above a certain speed threshold. This feature is also...

You will need a bluetooth OBD module. I use the OBD LX. But the personally I have seen an easier connectivity from the ELM 327

Activate TV tuner by going into Can Gateway --> Installation list, select TV Tuner. Reboot the MMI and there you go: 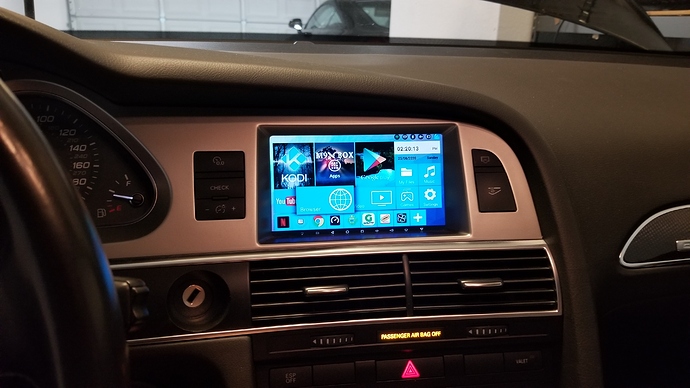 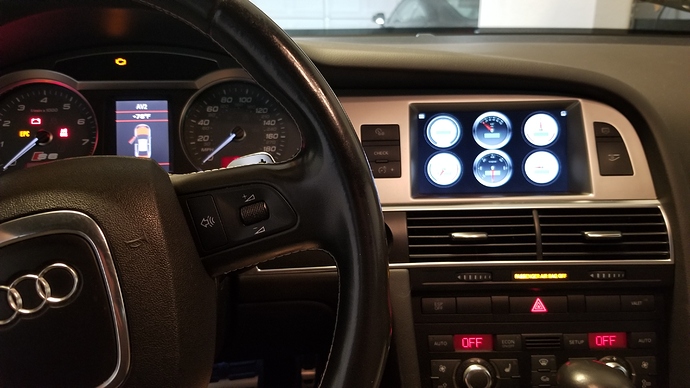 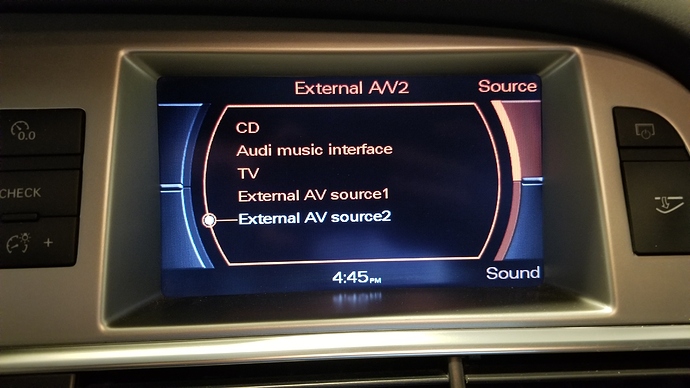 Forgot to add. You need a 20 pin connector such as his one.

I pulled a blue one from an 03 allroad at pick n pull under the glove box, very easy location to make my harness 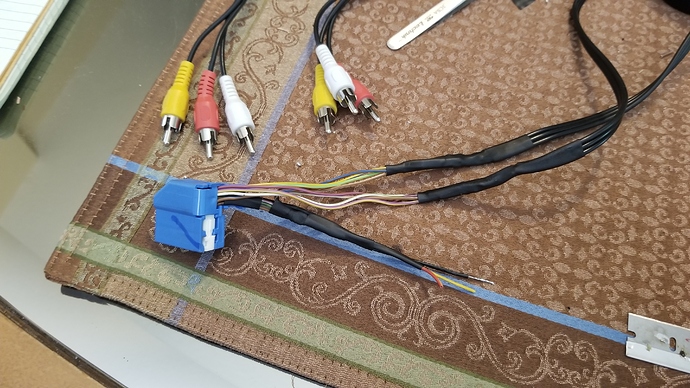 Per the guys instructions, solder all the grounds together. Including all RCA cable shielded grounds as below

My head still hurts from trying to digest this. Great stuff though. I’ll have more questions once I think about this further.

But it is easy trust me. Hardest part is making the harness. Just lemme know if I can help

This looks interesting. I’m just trying to wrap my brain around all the specific parts you ordered. Where they go in the car and what everything does.

What’s the touch screen for exactly? Just to program? What’s the android box allowing you to do exactly?

The android box is like your onboard computer just like an amazon tv in your living room. You can run bluetooth obd2 apps like dash command or torque. YouTube or netflix, play movies off the internal storage or sd card. I am going to use it specifically for engine stats to view temps, afr, etc while driving. Instead of an android box you could plug in a chrome cast and mirror your phone to the screen for example

Instead of using a remote, the touch screen allows for control of the android box. I like the android box because of the adaptability and options for software modifications, etc…

In reality you “replace” the sat radio with the analog tv tuner box. Or you can keep both. I removed the sat box to make extra space and I dont use it. Then enable tv tuner in the can module installation list.

The system is very plug and play.

The extra harnesses listed above make it easier to route and require power and MOST ring as audi supplies these cables short and not able to always reroute them to locations only 5" away.

This modification is near identical to retrofitting an AMI box in the glovebox on these cars. Only difference is you need to make the 20 pin harness cable for power and the Yellow, Red, White AV inputs.

I’ve done lots of MOST retrofits and RNSE retrofits with av addons, etc. Lemme know if you have questions.

All in all this whole system will end up costing me about $170 with the new android box, old tv tuner, and all cables including usb 12V to 5V plugs, etc… it’s a good deal imo for what benefits you get.

I’m assuming the android box has to startup and shutdown every time the car turns on and off - can you speak to what kind of experience that is like? Does it take minutes to boot up? Does it shut down gracefully?

Did the touchscreen get installed in the dash to replace the factory screen?

Edit: There are like 4 different configurations for the 3.5mm to RCA plug. The one listed above is the wrong one and ony works for old camcorders. You need one that is a “TRRS” like this one:

No the touchscreen is an overlay “sticker” of sorts that goes over the stock mmi screen. As seen here in DogMonkey’s DIYs. I still am waiting on mine from china. It is relatively easy to remove the mmi screen from the dash and gives you an opportunity to polish the OEM screen with some compounds to remove any scratches like I did once on my RNSE. The touch screen is also anti glare and has an oem fit and finish when reinstalled

You will need to trim off some of the screen mounting case in order to protect the touch screen ribbon cable. Dogmonkey bent his metal, I plan to simply cut away the 1" of in needed material and cover with fabric tape. When I do this DIY I will provide my pics and instructions. This ribbon cable and module is simply mounted behind the MMI screen with some 3m double sided sticky tape and possibly consider putting it inside an ESD bag for security of any static discharge.

Please excuse the winded response: Yes the android box pulls 2A @ 5V (or more if you are powering usb components off the android box). I have considered installing a small hobbyist 12V battery to supply power to the android box 24/7 and not drain the main battery but do not think I want to go through the trouble of designing an integrated 555 timer secondary charging circuit.

I have been monitoring the SAT NAV power plug that is not in use as I “planned” to tap power from that un- used plug with the female adapter pictured below. It appears that the 3 cables are ground, +12, and “sense” but sense also supplies a ground so I think that is what sends a ground “on signal” to the mmi components to power up.

However after leaving my volt meter on those pins with the car overnight under different parameters (trunk open, closed, car locked, unlocked, etc) it appears they receive constant power and there is a power supply switching module built into the MMI components themselves (CD player, nav, ami, radio, etc) that turns on the units when you activate the unlock feature on the car or press the start button to wake the car.

So given this issue I have yet to determine the best place to draw power from, to power up the android box. I have considered switched power from the passanger side trunk fuse panel, however if I shut off the car I am afraid it will immediately shut off the android box which would be a big annoyance.

So this is TBD at this time. I may open up the SAT NAV box I removed and monitor the internal power supply and see how and when it switches on and off, I may be able to steal that circuit.

In answer to your question, the android box boots within 30 seconds and is practically live once the mmi boots up so the delay is not an annoyance. I have it boot directly into dash command so the gauges are available immediately. As well auto connect to bluetooth OBD module and auto connect to my cell phone hotspot upon boot. You can also set up your cell phone to activate hotspot when it connects to a bluetooth device (MMI bluetooth phone / AMI bluetooth) with some apps from the app store.

It is not necessarily “bad” to cold shut off the android box without properly shutting it down. Does not seem to ever cause me any problems from when I had the android box in my AR w/rnse. However, there is a power button on the android screen menu bar at the bottom that you can press to shut off the android box when ever you please. I just am hoping to find some MMI power circuit that keeps our MMI systems live for a few minutes after turning off the car. Once I determine this location I will update.

Ha - no worries on the long winded reply, I prefer them. Yeah the box shutting down was more of an annoyance thing for me as well but it sounds like you’ve got a pretty solid plan for getting it to work as seamlessly as possible. I definitely am really intrigued by the approach. Have never even seen one of those capacitive touch overlays - super cool stuff. I hope you pull this off as I may end up trying to copy you anyways. Still a few other things to work on before I dive into anything like this though. Keep at it man!

I’m not an expert but if possible i would pick the power supply to the daytime running lights.
they light up as soon as the car starts and stay on for a moment after you leave the car which would make them a perfectly convenient power supply.

They also come on with the “leaving home” enabled.
Problem there is that they turn on when the doors unlock but the lights then turn off when the door on the drivers side opens.

Simple solution. Bought a prebuilt 555 timer relay. Ill be able to mount this somewhere next to the fuse box in a clean and oem looking fashion. Also the LCD turns off after 5 minutes so there is no battery draw. This will plug into constant +12V and switched +12V. I can adjust the shutdown to be whatever time I want it to be. Likely ill set it for 10 min

Project is getting closer to 200 dollars

Here it is in working action. Pleased with the functionality

Thanks! I’m dreading taking off the cluster bezel to install the touch screen and run the USB and trigger wires to the trunk. Do it one of these “board” days