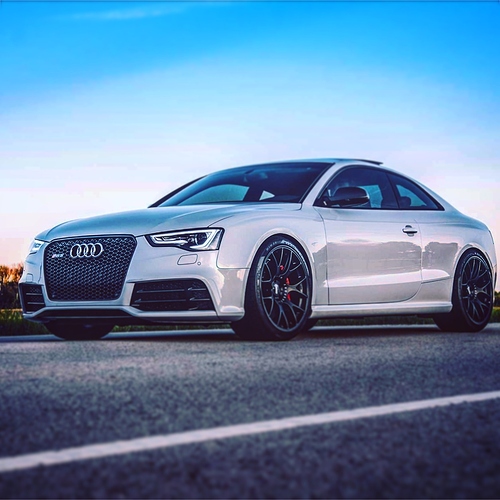 I decided to modify my 2015 RS5 a little differently over the years and thought I would share the info good, bad or indifferent with you all. The common thought is to add power to a vehicle to make it faster. What happens if instead, we keep the same power but remove unnecessary weight? Can these cars lose 100lbs? 200lbs? 300? 400? 500? Can it be done tastefully and without losing the very essence of what makes these cars great in the first place? Is moving and stopping a lighter car better for it long term? Are there other benefits to be had by trimming the fat? The info I have found online shows that these weigh 4,012lbs (Coupe) - 4,420lbs (Cab) That’s more hog than pig…so let’s hit the gym and see what happens.

I’ll update and add as new info comes in.

This is an educated guess based on adding the weight of a few heavier options onto the base weight of a non sunroof, CCB, Wingback Euro Spec vehicle that starts at 4,012lbs

Up First: The lightest exhaust on the market…

The first mod on the dietary journey was not a cheap one: Akropovic catback exhaust. A full TITANIUM unit that weighs 20lbs less than the stock valved sport exhaust. Finished with carbon pig-snout (appropriate) tips they seem to look like they were supposed to be there from the factory. The sound is a 7/10 on the dB meter of exhausts I have heard. 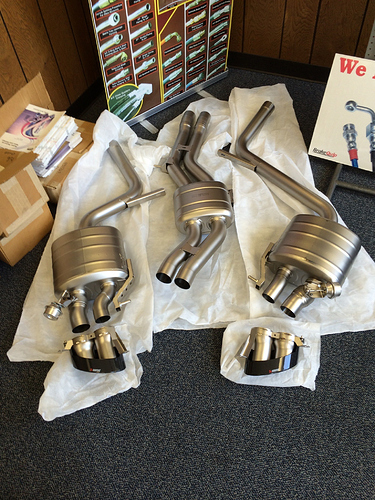 Moving up the line the factory resonated downpipes were replaced with AWE NON-Resonated pipes. This took 6lbs off. The sound is louder and angrier but it did introduce a little drone in the 1,800-2,000rpm range when in “D” mode loping around town. 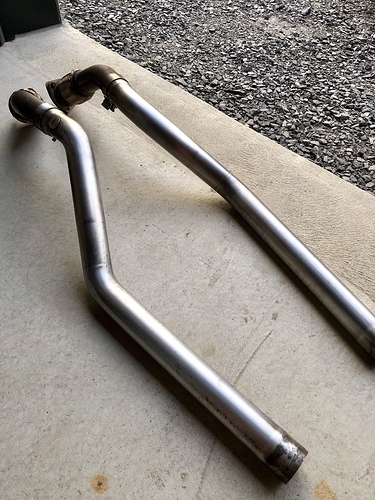 The next part I wanted to tackle was reducing “unsprung” weight. Specifically, reducing rotational mass and reducing the strain on suspension and other driveling parts. Tires, wheels, brake rotors are all rotational “unsprung” while calipers are non rotational “unsprung”. There have been discussions for years on how to calculate the realized weight savings of both unsprung and rotational. I’ve read a lot about it and came to the conclusion that it is not clearcut. Though, the further away from the center of the wheel the weight is, the worse it is. For example; heavier tires are worse than heavier brake rotors. They both rotate but are at different distances. The best way to describe it is to take a big bolt, tie a string around it and swing it around in a circle. The longer you make the string the harder it is to swing it.

Taking all this in I decided to purchase Lightweight wheels from BBS to replace my factory Rotor wheels. I sold them to a guy named Rich with a nice B7 RS4 on the east coast. 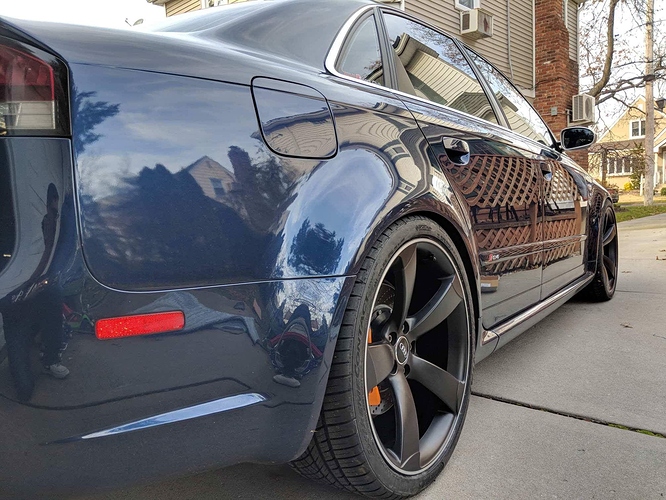 20x10.5 BBS CH-R wheels arrived and I popped off the curb rings prior to install. These wheels are 1.5" wider but weigh 5.3lbs less each compared to the stock Rotor wheels. 34.5lbs vs 29.2lbs. While these are not exactly the lightest replacements out there, they are a good start and look OEM+ 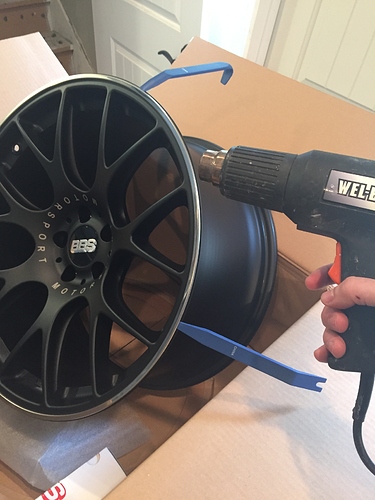 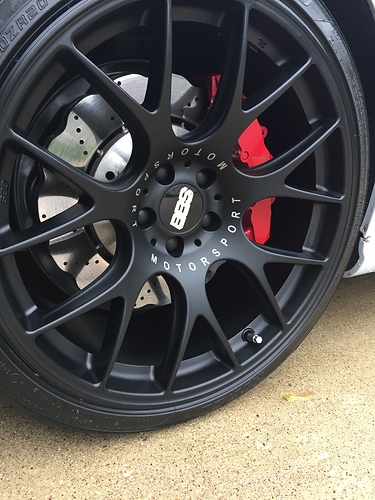 Once I had them installed and took it for a rip it seemed to steer a little crisper, stop a little faster, accelerate a little harder and yet tramline and grab grooves in the road a little more than before.

The next stop was a BIG one…Carbon Ceramic Brakes.

I had followed JamesRS5’s journey of fitting factory RS5 front brakes to his Sepang car in Dubai and asked him a million questions. He was very helpful and I started hunting for a set that would be somewhere between used and usable to help get the cost down. I found a set eventually and had them shipped up to me from California. I couldn’t believe the size of them! The calipers were 6-pot Brembos instead of the 8-pot Brembos I was removing. Common sense would dictate that they should be smaller…They were the size of Kleenex boxes! 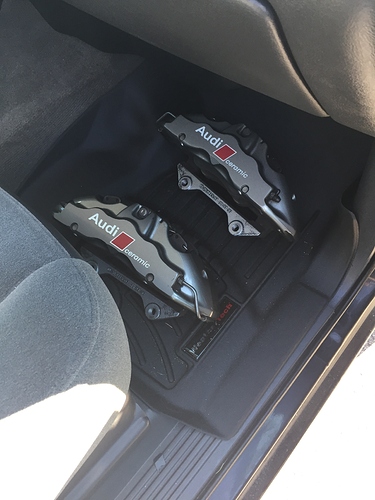 The rotors arrived separate and were massive to match the calipers. Standard box cutter for size reference. 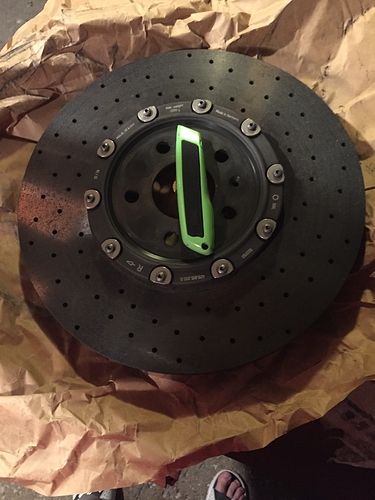 When held up next to the stock scalloped steel rotors there was a huge difference in weights. The carbon rotors weighed 11lbs less per rotor or exactly half the weight of the steel at 22lbs each.

I had the red calipers option on my car and I wanted to keep that look so I sent the calipers out to Kelly Moss Racing in Madison, Wi and had them powder coat and rebuild them. They did an amazing job and it’s one hell of a facility. This is what I received back: 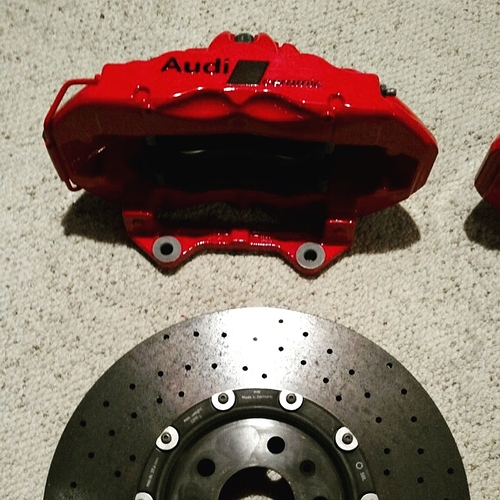 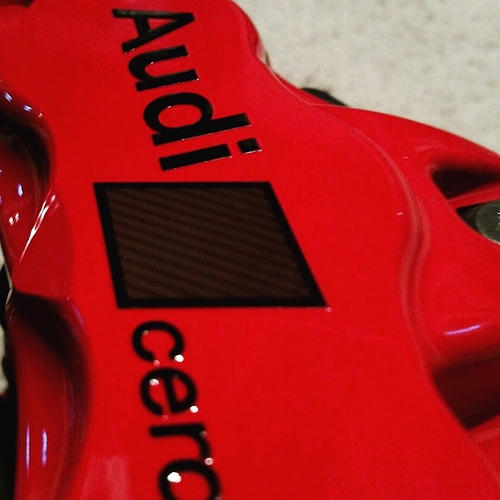 The dealership that built my car installed the new CCB package for me. I was under warranty and felt it was the best option at the time. They coded them in for the “disk brake wipe” and away I went. Next day I found that they had let brake fluid drip down the face of the brand new caliper…it sat overnight like that and I had a pink drip line top to bottom on the driver side face of the caliper. Not good! Nothing came of it though as after heat cycling a time or two it magically went away and turned back to red again. All is well…

“So how do they drive?” It was the most immediate seat-of-the-pants mod yet. Everything felt better: The acceleration was faster, the suspension feedback was more defined, steering seemed easier, THERE WAS NO MORE BRAKE DUST, they don’t rust up after a wash and best of all…they stop you properly. There is a little more travel in the brake pedal with the CCB over the steels I noticed. It is a less jerky ride now and they don’t seem as touchy on first grab. Some might call that less resposive.

Next up: Euro Exclusive Interior

Great updates on this. LW mods are a big win and your so right. The rotational weight especially rims and rotors make a noticeable difference.

I knew there were (3) different versions of seats offered in the RS5 from the factory:
Comfort Cooled (USA)
Super Sport (USA) what I had
Wingback (Rest of World) 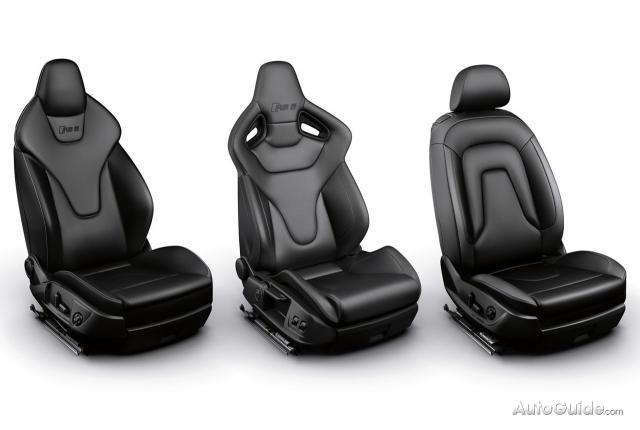 There were also Recaro Sportster CS seats that really looked nice and were similar to the Wingbacks. I was aware that the further you went down the list, the lighter the seats became.

Having a Suzuka, Black, Carbon, Red theme already I knew I wanted to stick with that and was hoping to find some form of red accented seats. I started the hunt by finding a local car guy who had wingbacks in his White A4 Avant. He let me sit in them and they were snug but doable for a 6’3" 200+lb bridge-troll like myself. Perfect! That model is an option.

Next I found a Nissan Dealership selling a Nismo 370Z on the showroom floor and slid into the red bordered, Sportster CS seats to compare. They were not nearly as comfortable or supportive. They felt more like I was sitting in a box than being hugged by the seats. I threw those out as an option. They are beautiful seats though… 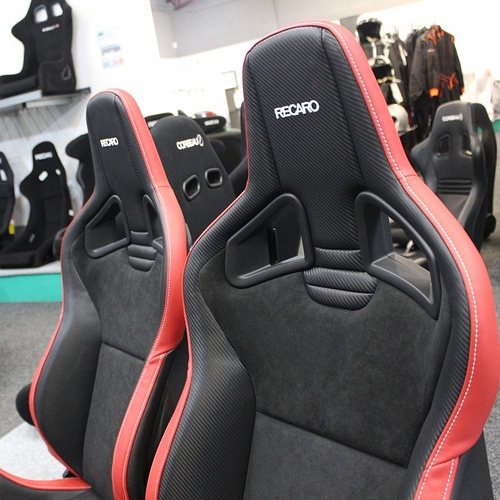 The hunt began for a set of wingbacks…

Give us the deets on the wingbacks!

I searched for a set of Recaro Wingbacks and was willing to entertain a few different styles and designs so long as they said “RS5” on the headrest. After finding, buying and shortly thereafter “Unbuying” a set due to a feeling of unease immediately after the transaction, I had to start over…

After looking for 18 months I finally found a full interior in Germany that REALLY caught my eye; They were an “Exclusive” set of black and red Wingbacks with all red stitching and included red stitched door panels, arm rest and back seats. I used Google Translate and struck up a deal with the company that had them. I actually paid for them while at Disney World. For a few minutes, it truly was the “Happiest Place on Earth”.

I didn’t want to take chances so I hired a Customs Broker to handle any paperwork and possible issues. Shipping was definitely expensive to begin with and then the crate was sent to the wrong airport. I had it for Milwaukee and it went to Midway in Chicago. I had to pay to have it shipped up to me. Good times!

A crate the size of a live tiger showed up and I opened it up…Perfect condition and a great overall protection job. 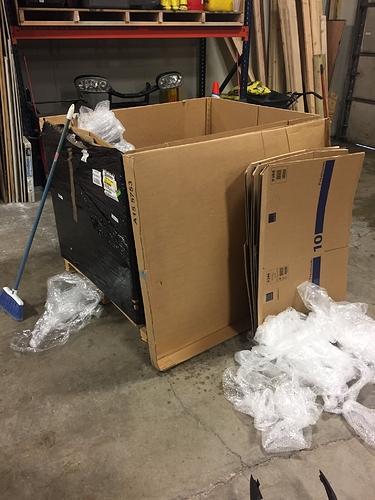 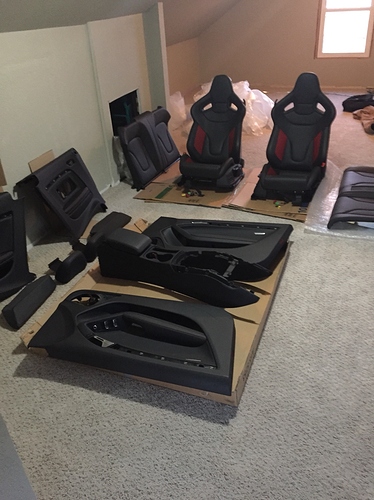 This was what I unwrapped and brought to my lair

Oh man they look beautiful love the red in them think you pulled it off and got yourself some beauties wow !!! 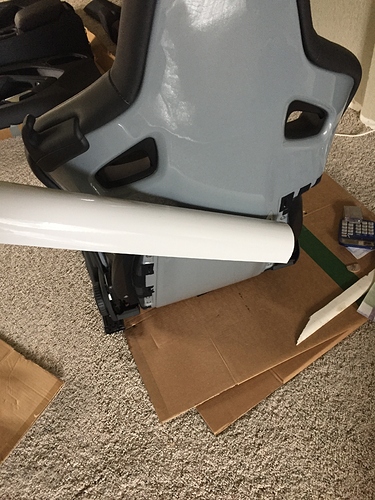 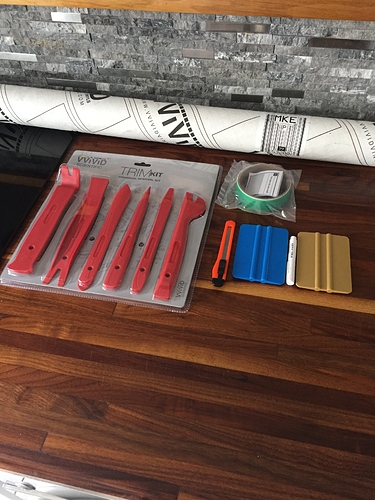 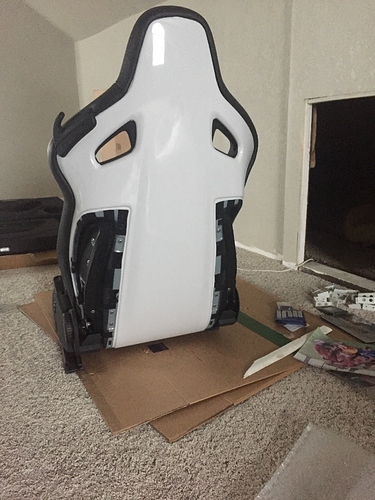 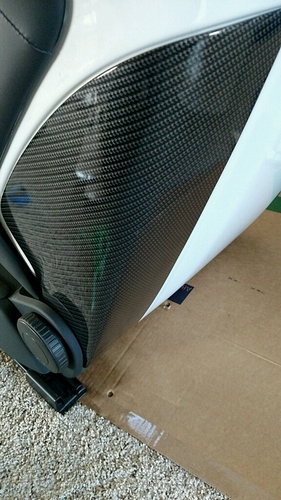 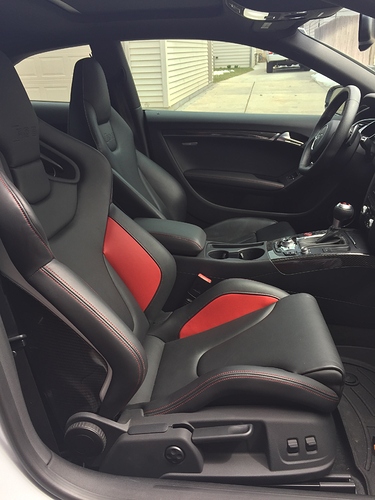 Beautiful ! Jealous of your seats.

Couple questions for G’Brew . Have you Draggy your lightened car yet and do you plan or have you done the JHM stage 2 yet? I’s so curious! I will most likely get the Stage 2 this year.
Thanks

Vancmann, I have not Draggy’d it yet nor has it been back to the track other than that one time. Soon though if all this VIRUS stuff goes away. As far as the Stage 2 JHM goes, yes…I would love to have that and foresee it going in down the road. If I could pick one mod i’d like to do next it would 100% without a question be the RMR crash bar and trans cooler. Fixing the weak links seems like a good idea before adding more power.

If? I surely hope the virus stuff goes away. I think you are Exactly right and good control in keeping the priorities that way. I’m for the instant grat so if I chip it first, I won’t overly push or track it till I get the RMR crash bar. If you get a draggy, would be cool to see the before and after.

I have similar philosophy in that if I reduce the weight, all performance areas of the car will naturally be improved.