We really need an official thread on this site to discuss both stage 1 and stage 2 tunes from JHM. Ask any questions and share your experiences here as well. We have a number of members, including myself, who have stage 1 and stage 2. I’ve talked (gushed) about it endlessly so it’d be great if others chimed in. I’ll go back and find my initial impressions for both and post it here along with dyno runs and what not.

If the RS5 had come like this from the factory, it’d be legendary and leagues above its counterparts from BMW and MB during the same time period.

Here are my initial impressions after flashing to stage 1, made on 8/24/18 and I’m trying to be conservative in my thoughts and not be too enthusiastic with new mod bias ; " So my initial impression is very positive with the tune. I’ll simply describe the car as “crisp” and more authoritative with a better upper midrange and top end pull.

-My first cold start was a bit rough, I’ll admit, but the cacophony seemed to die down more quickly. Smelled a bit richer.

-I did take it to redline and the car felt faster. I’m going to hold off final judgement as it was ten degrees cooler this morning than when I usually head into work at noon. (83F to 93F). But it does seem to pull harder, even though the midrange. I’ll be 100 degrees when I head home so we’ll see if I feel the same way, LOL.

-The throttle feels snappier overall but not in a throttle hijack sort of way. The easy modulation factor is still there and initial throttle tip in isn’t overly aggressive but it does seem to accelerate more quickly.

-I drove around in Drive at times and it would downshift into 6th from 7th more readily.

-I think I noticed one abrupt transition from neutral or zero throttle to WOT in third, around 4K rpm. And I “think” I have that logged. Can send to you Jake if you’d like me to. Wasn’t bad but I did notice it and didn’t have a chance to repeat.

The car does seem to be a bit smoother, more crisp and pull more readily through the RPM range. Enough so that I actually have no doubt it makes more power over the OEM coding.

I’m scheduled to dyno again next Thursday, that’s the soonest he can get me in. He’s off today through Monday (birthday) so I won’t have the dynojet files until Monday, sigh. But I’m off that day and will be able to plot them all out and post them up."

Here is my first ever dyno session with the JHM stage 1 tune.

Ok let’s get right to the meat. This is the JHM tune vs. the OEM ECU, STOCK INTAKE ON BOTH RUNS 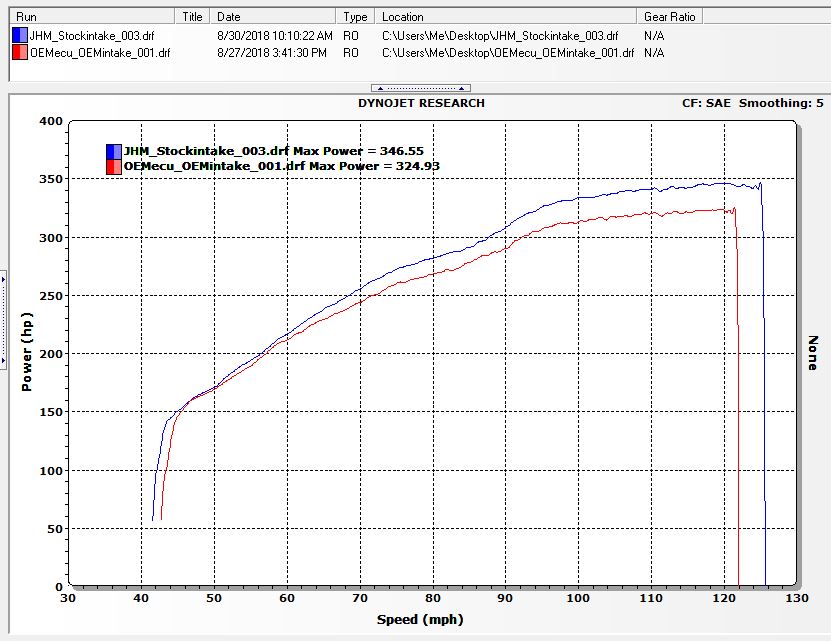 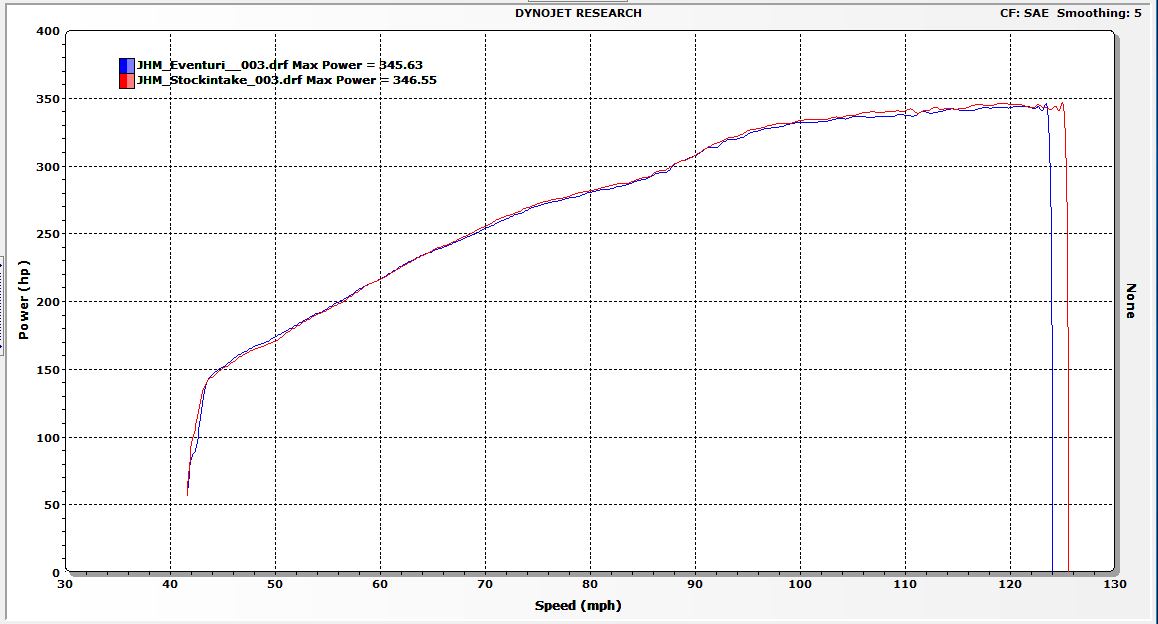 This is all of the JHM Tuned ECU runs both stock intake and Eventuri intake. Three runs each. The third run was the best run on both. 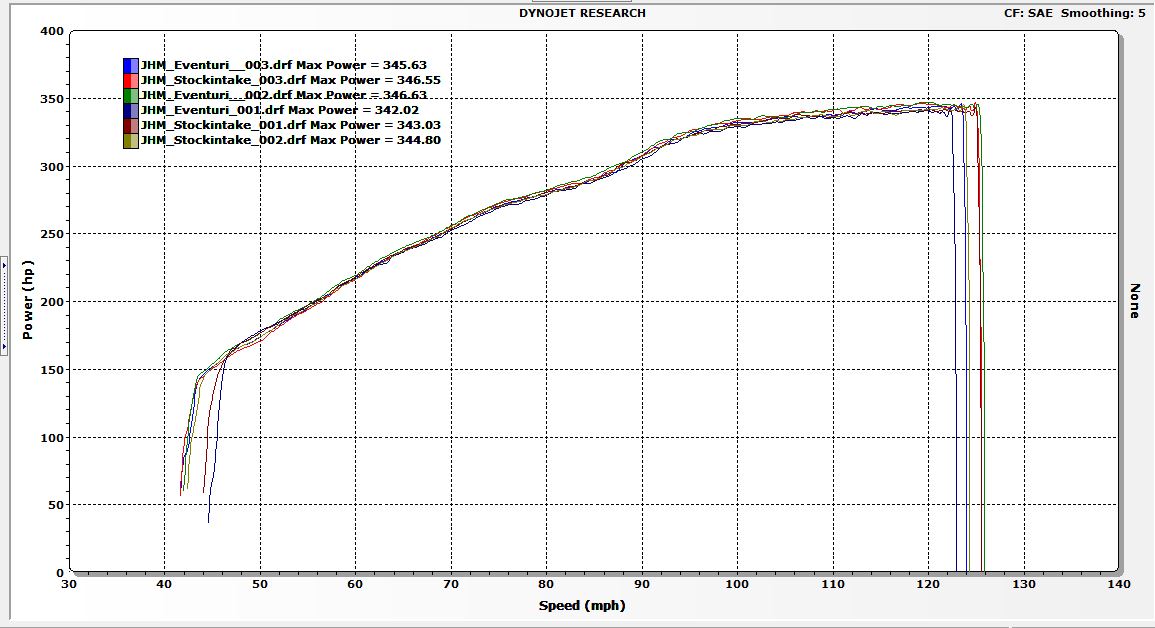 I also have viable logs for all six runs today. It’ll take me a few days to analyze those. I’ll upload them to the dropbox file and will update this post with the link shortly. The dynojet run files will be in there too so you can view and analyze them yourself by downloading the WinPep7 software (PC only).

So two times, the Eventuri showed no gains. On the last run for the Eventuri and the OEM airbox, I took off the radiator cover just to see if it was a restriction. Picked up one or two hp but nothing that would make you say aha!

Temperatures were about 10 degrees cooler when we strapped the car down but I’ve posted SAE corrected so they’re apples to apples. But pretty nice gains across the entire powerband. I’m still working on securing dyno time on a different dyno so we can get the torque figures. I’ll likely have to travel at least an hour to do that. I’ll post up more graphs later including all the runs individually.

Video of three of the dyno runs: 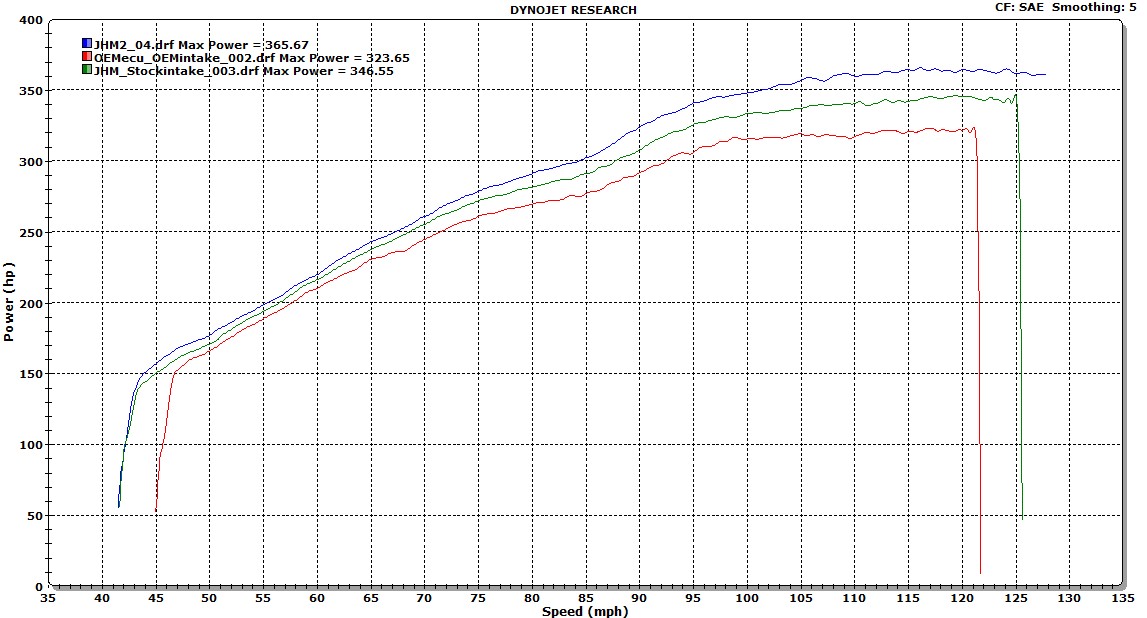 Quite a big difference between oem and stage 2 right from the start of the run all the way through to max rpm. I’ve not seen it on a graph until now makes you realise just how much JHM have managed to improve it over the oem tune for a N/A engine its impressive !!

I need to head back to the dyno soon to get readings with the new software. I’ll have a torque readout as a result. Obviously won’t be able to compare it to OEM but it’ll be informational none the less.

It will be good to see the torque out put in a graph for the stage 2 as i again haven’t seen any as of yet so it will be very interesting not only for the max torque but also and more importantly the torque curve ! Bring it on can’t wait !!

Ape any progress on the E fuel. It would be really interesting to see how much difference that helps make. I know the RS5s run hot and using that might help add a few more ponies.

PS great thread and documentation.
Looks like a 40whp gain total. If you told people you would be able to get 40whp out of a NA car with a few bolt on mods and a tune most people don’t believe you. Espically since you still have your cats in correct…

JHM has been doing very well in the NA game for a long time and its great to see it continue and its even better to see more and more great guys like yourself helping bring out this good information.

Waiting for ethanol levels to stabilize here. I’ll most likely check on Monday to see where it’s at. Temps are mostly above 70 degrees during the day with 80’s on the horizon.

Honestly the car would have dyno’d higher but the ambient temps were fairly high. And yes, the cats are still in. I’m going to go back and get torque readings as the dyno operator updated his software to WinPep8 and has an OBD plug-in. I can now get a tach signal.

What I figure is the ethanol will make it like it’s winter here. I’m sure my EGT’s will go down a bit and I’ll pick up the hp lost through ambient temp increases. That’s my hope anyway!