So I’ve started on my journey to add wireless CarPlay to the existing MMI system and screen. No screen replacement at this time. I’m hoping to do this on the (relative) cheap with a unit I bought off of Amazon for well under $300 shipped.

Assuming everything eventually works, I’ll turn this into a DIY thread for everyone else.

While I’m waiting for the new updated RS Nav units to be released, I found a very cheap wireless mirroring system on Amazon, specifically the Carlinkit.
https://www.amazon.com/gp/product/B07S1M9XYB/ref=ppx_yo_dt_b_asin_title_o08_s00?ie=UTF8&psc=1

Before you go and order it, know that it did not work as delivered so a bit of a spoiler. But read on, there’s hope.

I believe they sent me the wrong wiring harness patch. I’ve sent them a ton of information so hopefully they have the correct harness. My was labeled Q5 but I believe the S5 (2013+) MMI is identical to the RS5’s.

This is what I received, from China, in about seven days. 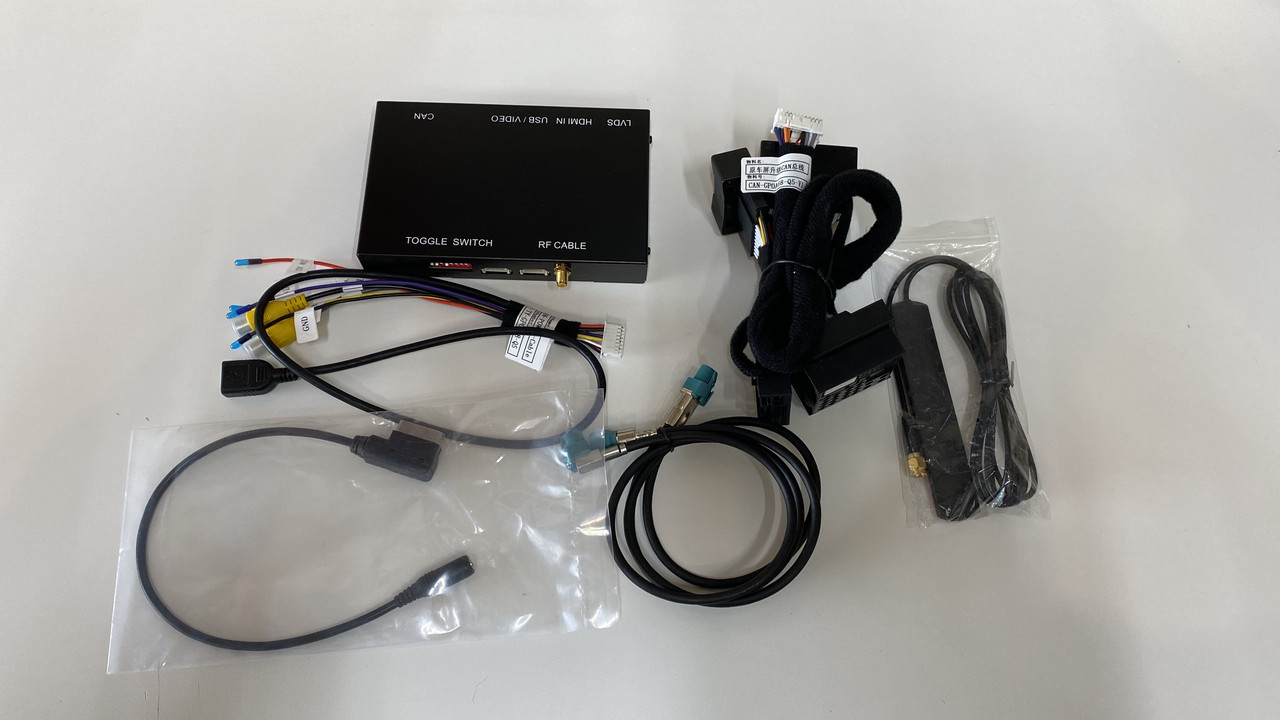 The instructions were very poor and I practically needed a mangnifying glass to read the type. I ended up pulling the MMI unit out and took a bunch of photos. Thought this would be a good process to document for others. Note, the 2014 and on MMI is slightly different. I don’t know if the connectors on the back are any different from the 2013.

The main harness splice did fit. It essentially sits in between the MMI and factory harness and plugs into the Carlinkit box. It had two additional plugs coming off the splice however, and there wasn’t anything to plug it into. The kit also contained one additional USB/Video/Audio and wiring harness which didn’t have anything to plug into on the RS5 either.

This is the main electronic “box” which adds Apple CarPlay. 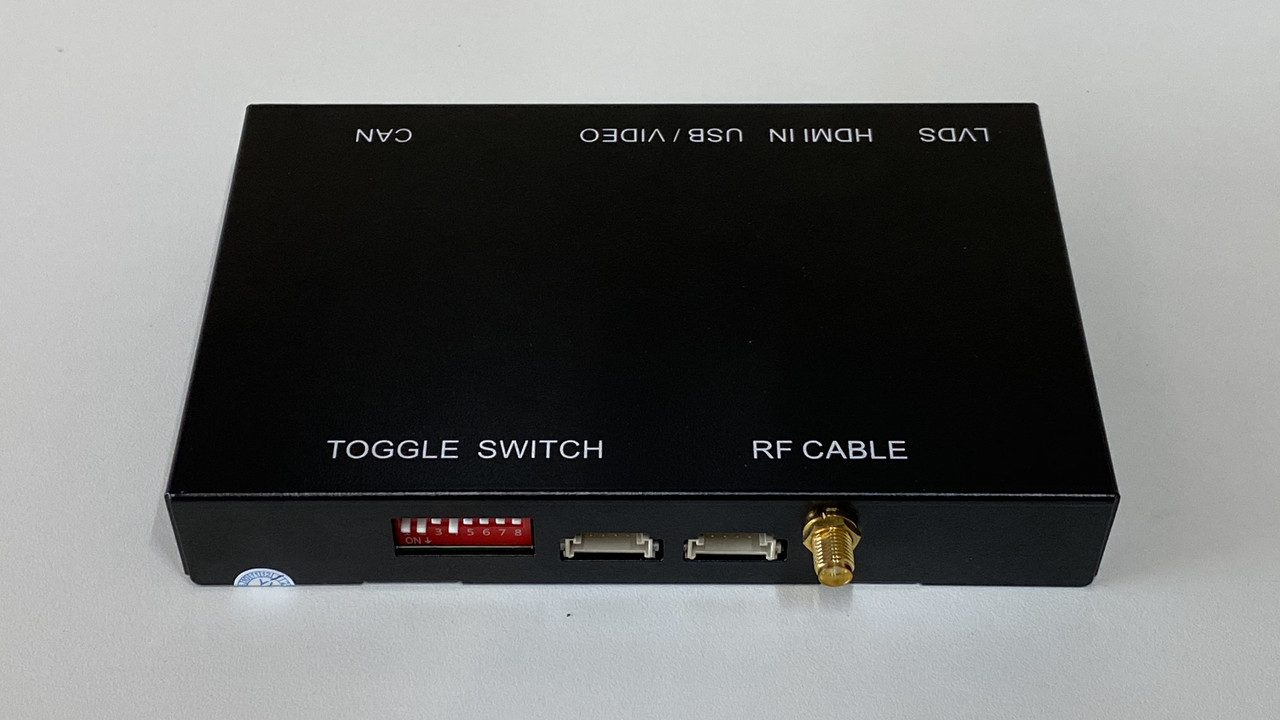 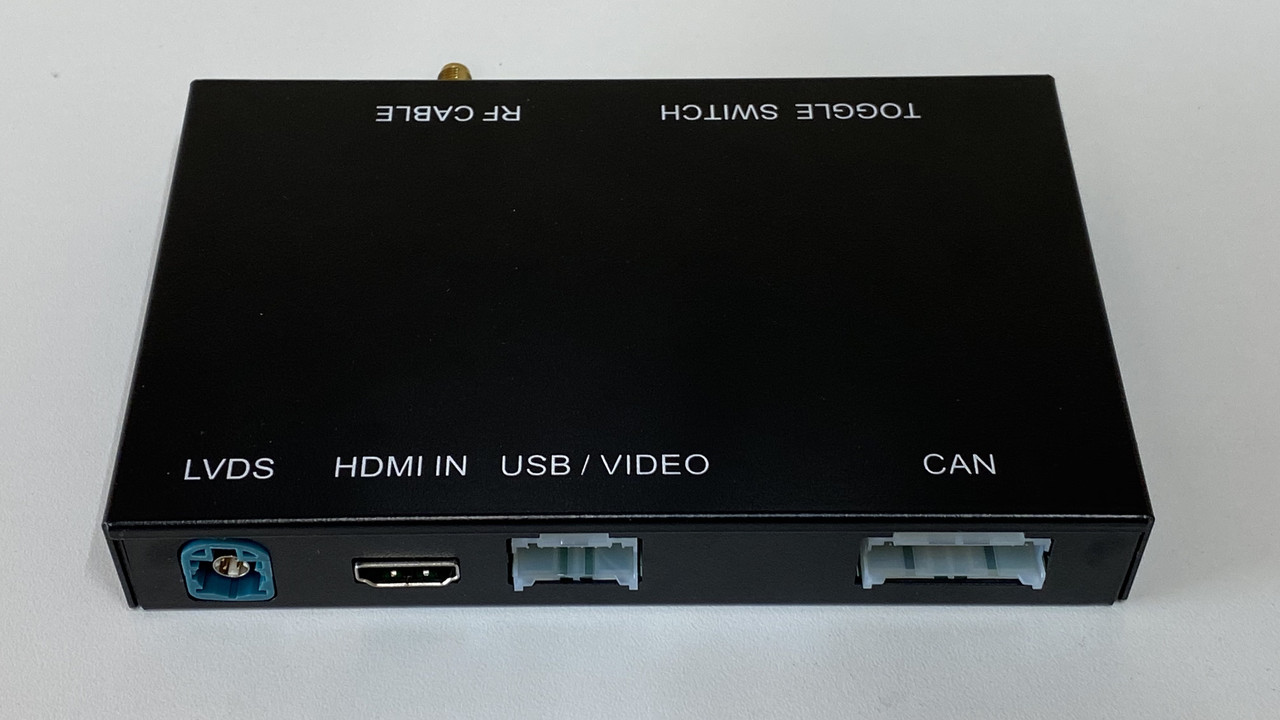 On the main box, they have a compatibility chart and dip switch chart. The unit came set up for a B9. 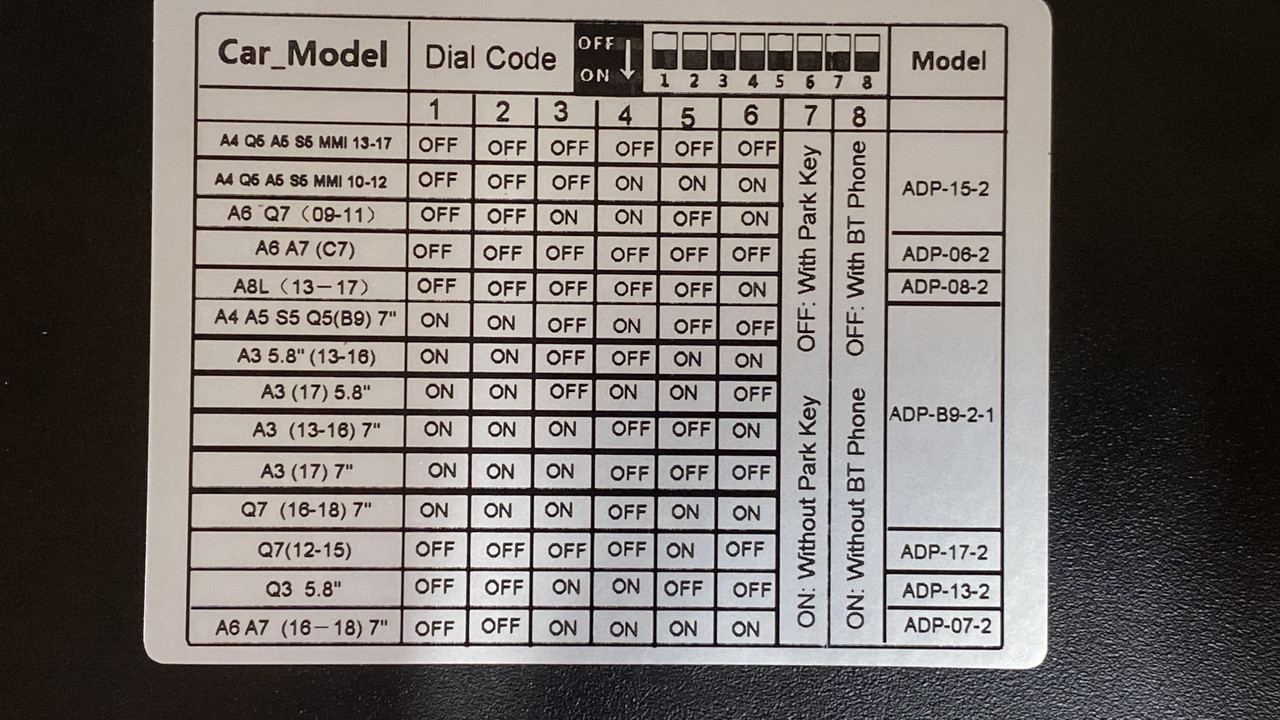 Here’s the back of the MMI unit with everything still plugged in. Good idea to take a photo to remind you of what goes where! 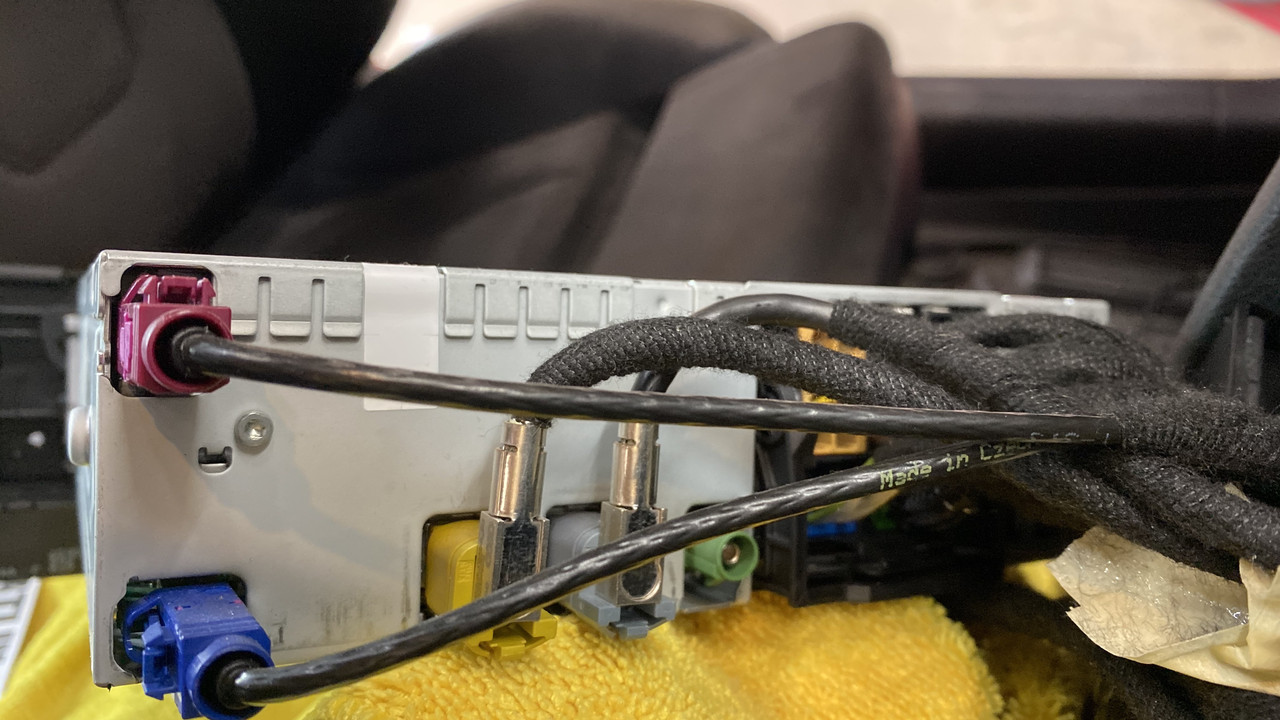 Completely unplugged, here’s a shot of the back. 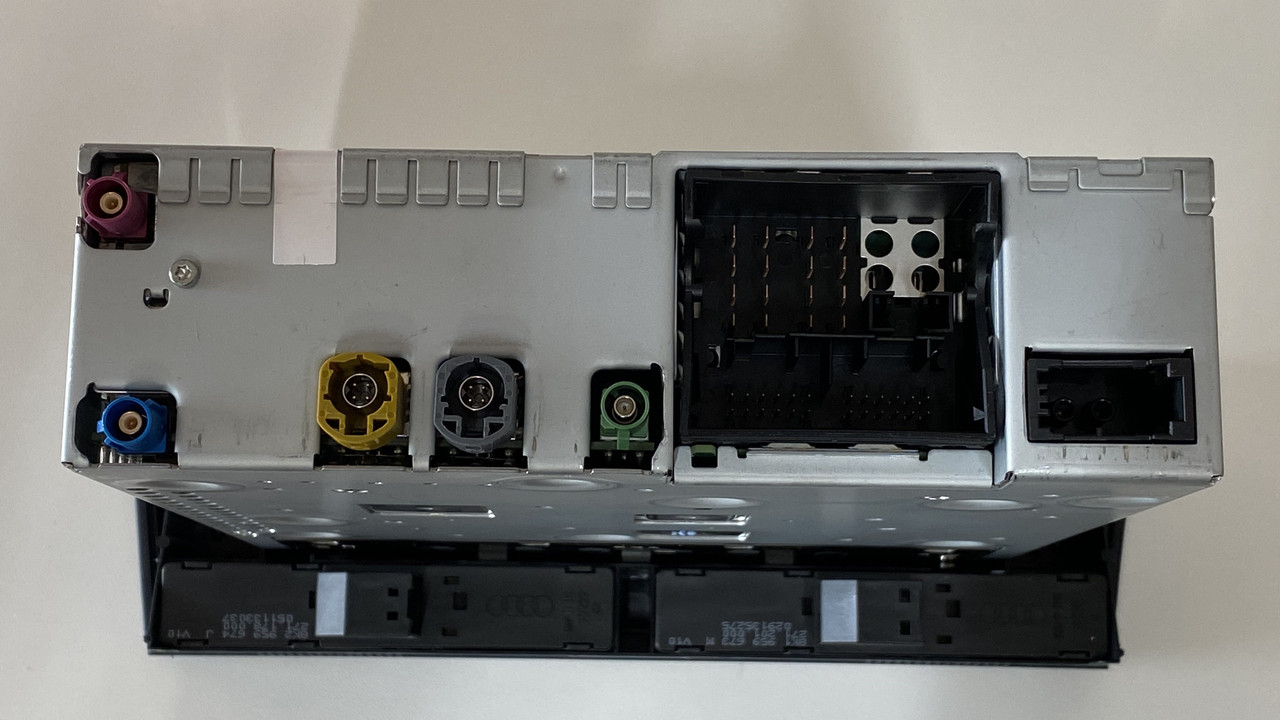 I don’t know what each plug is for. I need to look over the wiring schematics and haven’t done so yet.

The violet, blue and green plugs are all single pin antenna-type plugs. The green one is not utilized.

The yellow and gray plugs, which are four pin male, are also unknown but I know at least one is the back up camera and I’m guessing the other is the front parking sensors.

The plug on the far right is an optical plug. Guessing this is how the sound signal is delivered to the amp. The big plug on the right is the main harness interface plug.

Closeup of the optical output plug. 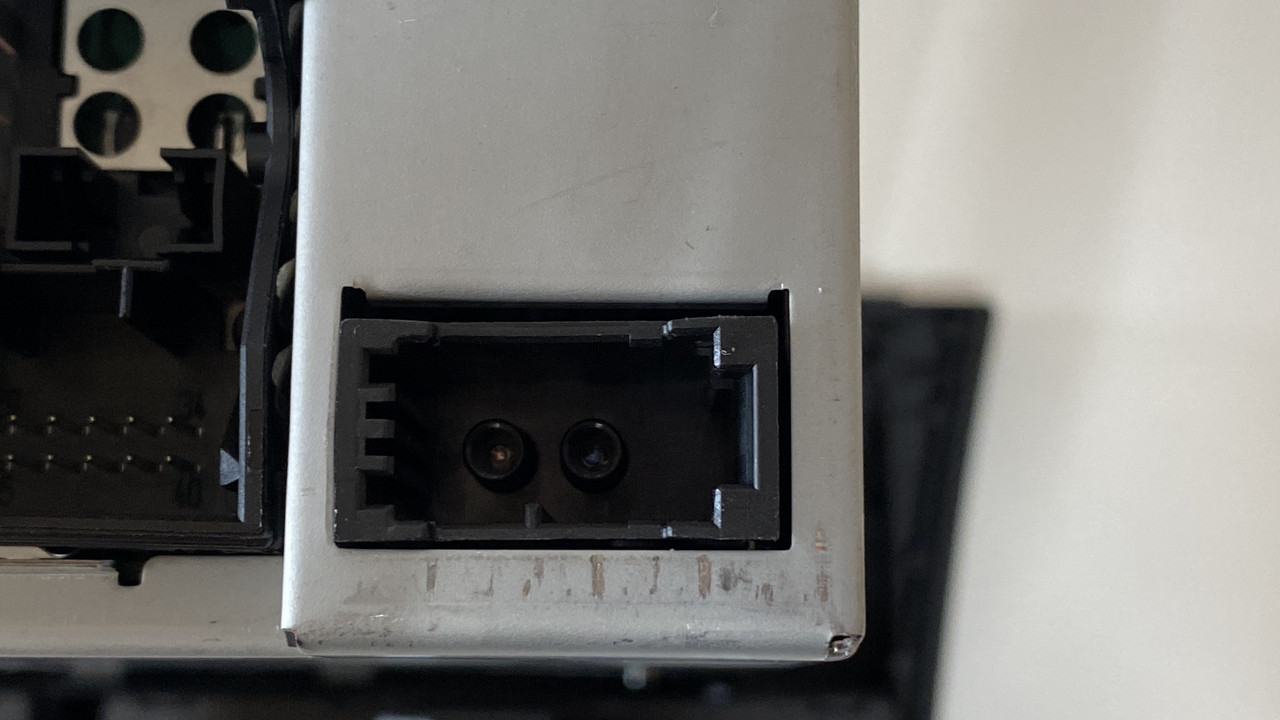 This is the kit’s “splice” harness. It plugs into the back of the MMI unit and into the factory connector. 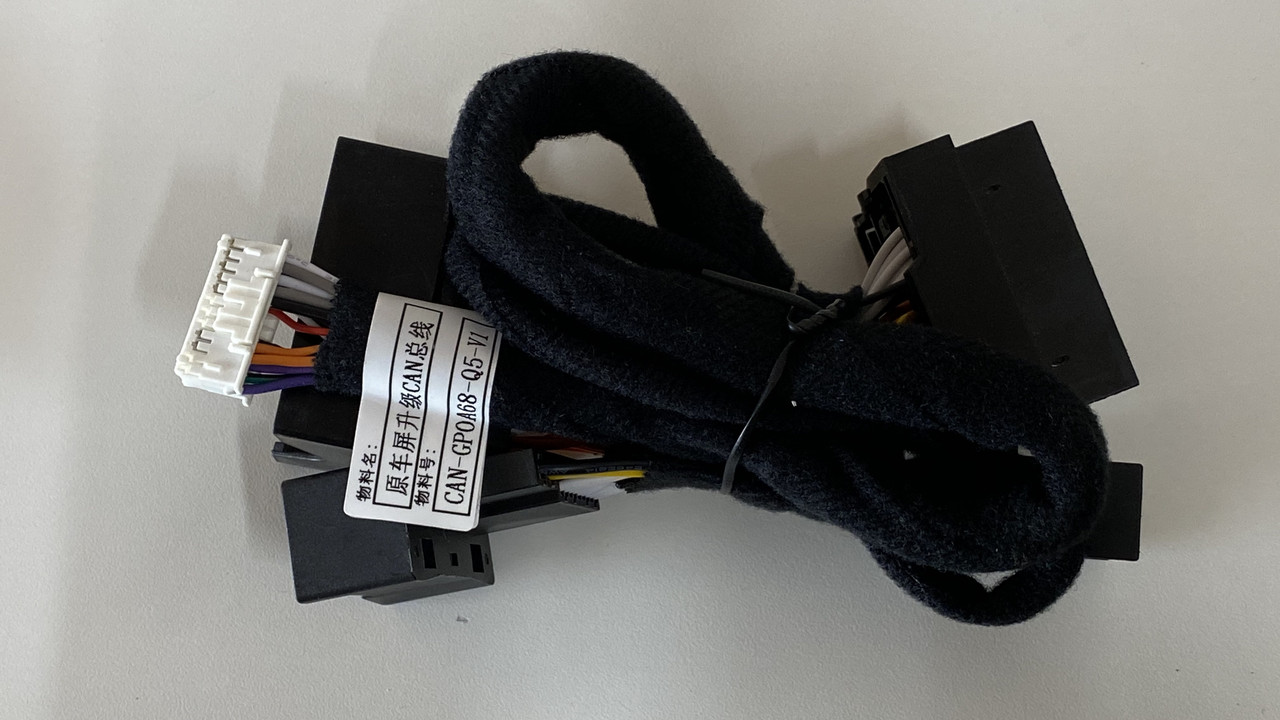 This plugs into the Carlinkit box and has a USB out. The rest really was of no use. Everything was labeled Q5 too.

Once it’s plugged in, you have these two plugs which have nothing to plug into. Has to be the wrong harness. 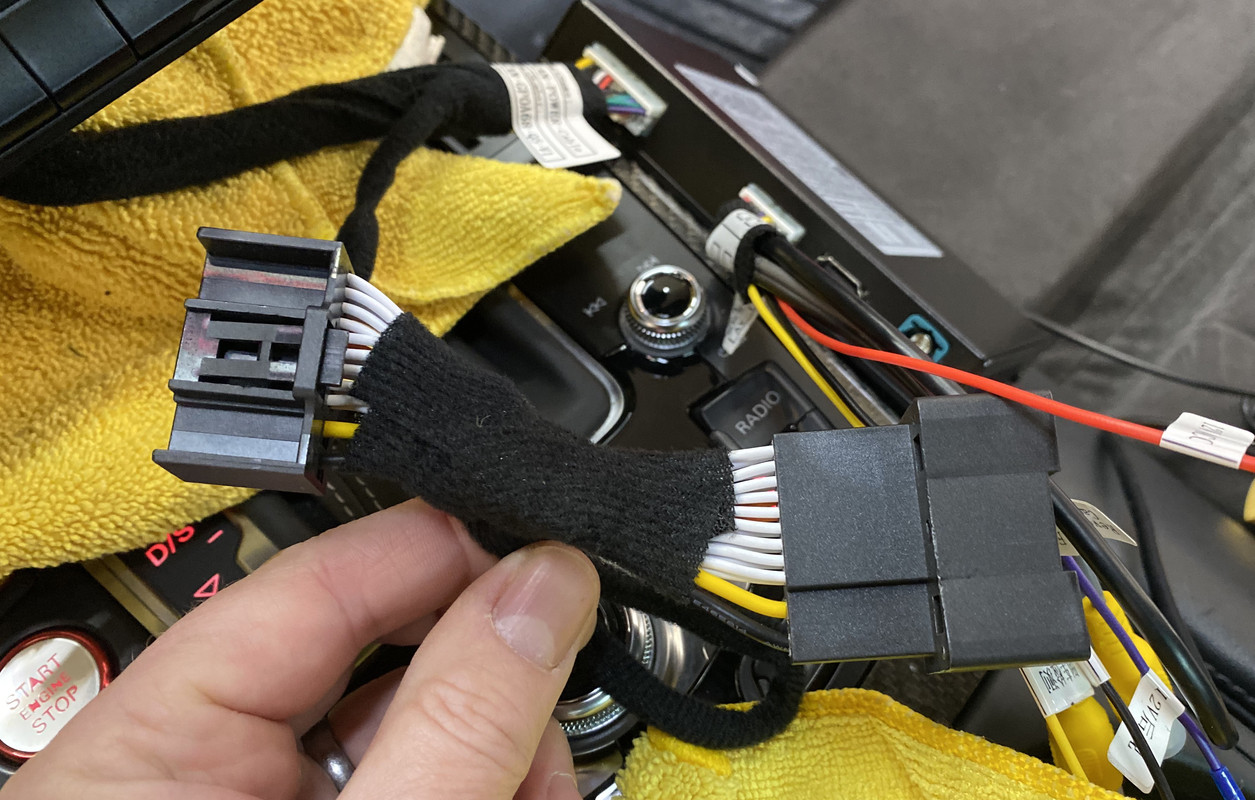 One end of the Carlinkit splice harness plugs into the Carlinkit box (plug on the left). Plug on the right is the USB and a series of power/ground wires for who knows what. 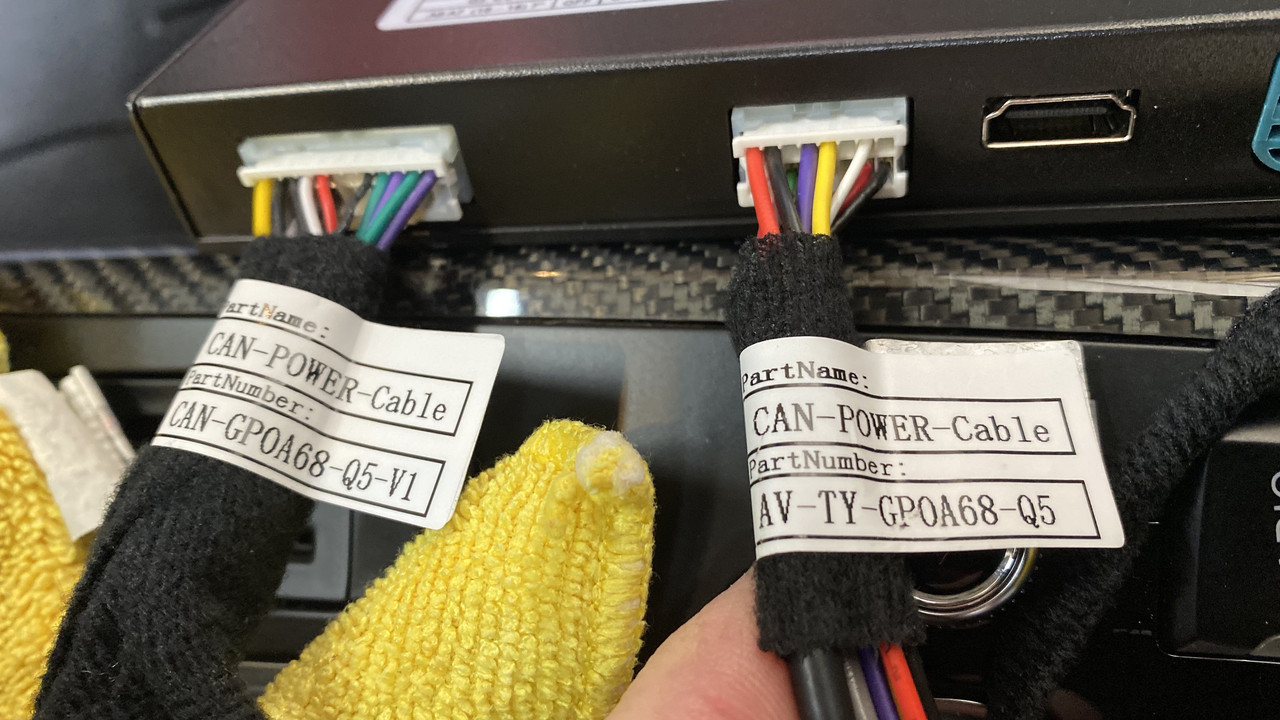 A few photos of the stickers on the OEM MMI unit. 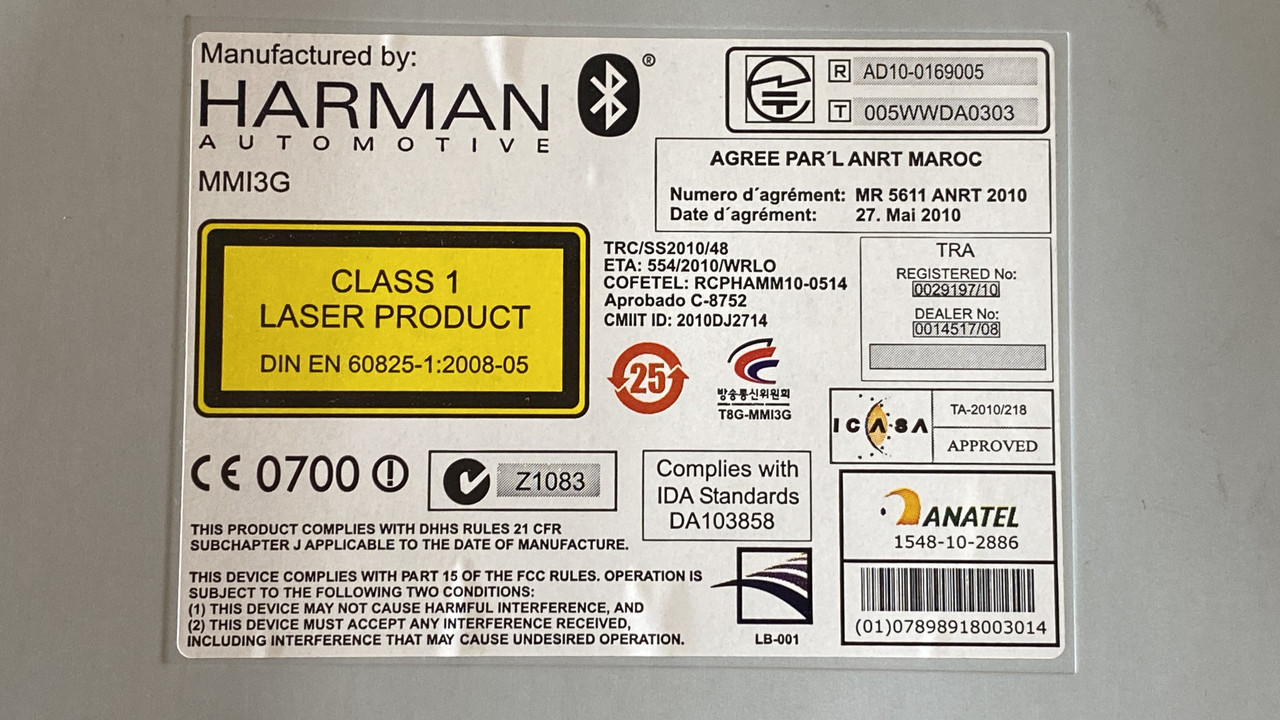 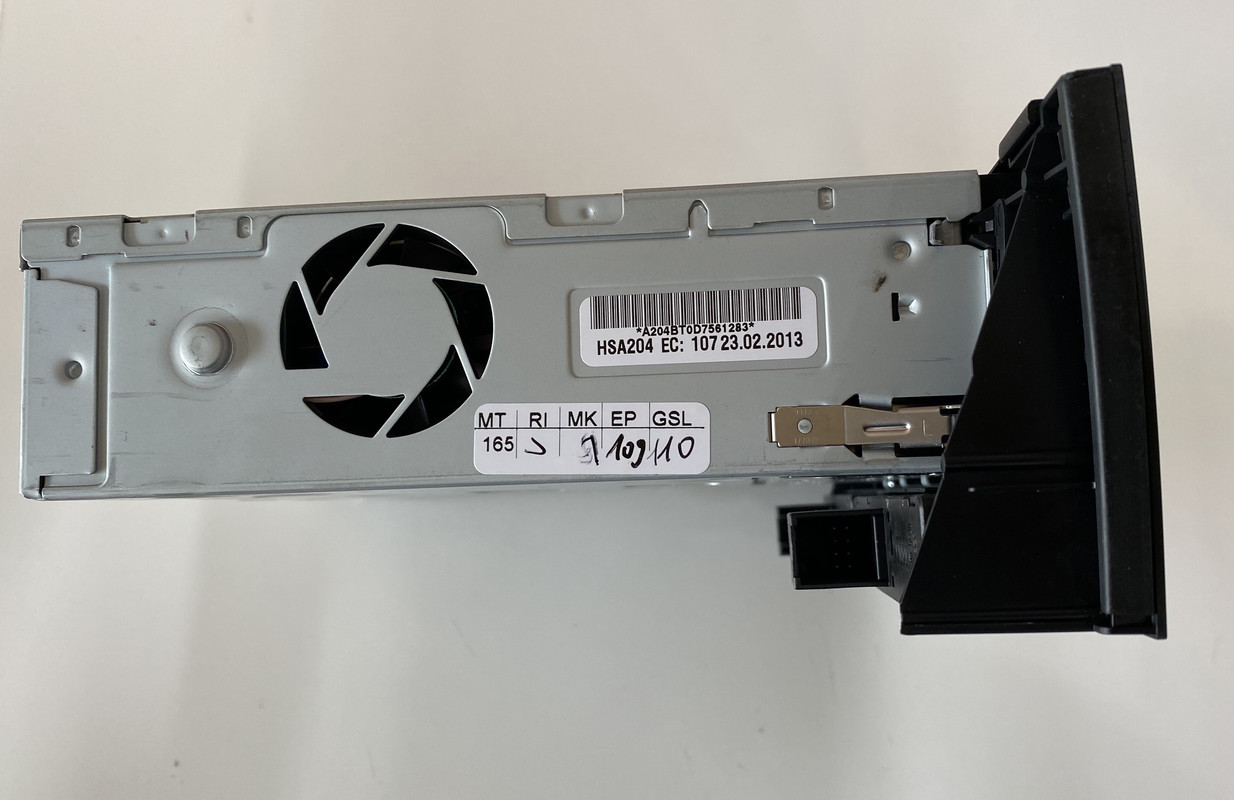 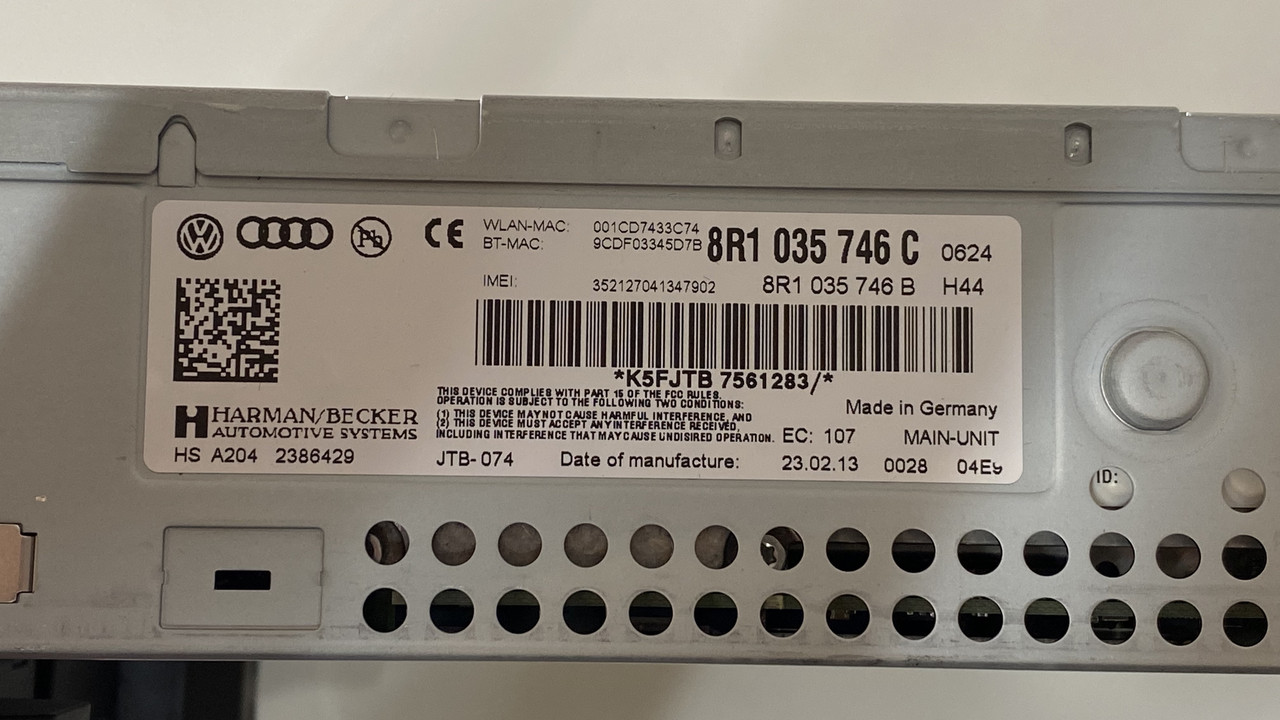 It is VERY easy to remove the MMI unit with the right tools. You’ll need two of these which can be found on Amazon or even, at times, Walmart. They’re cheap too: 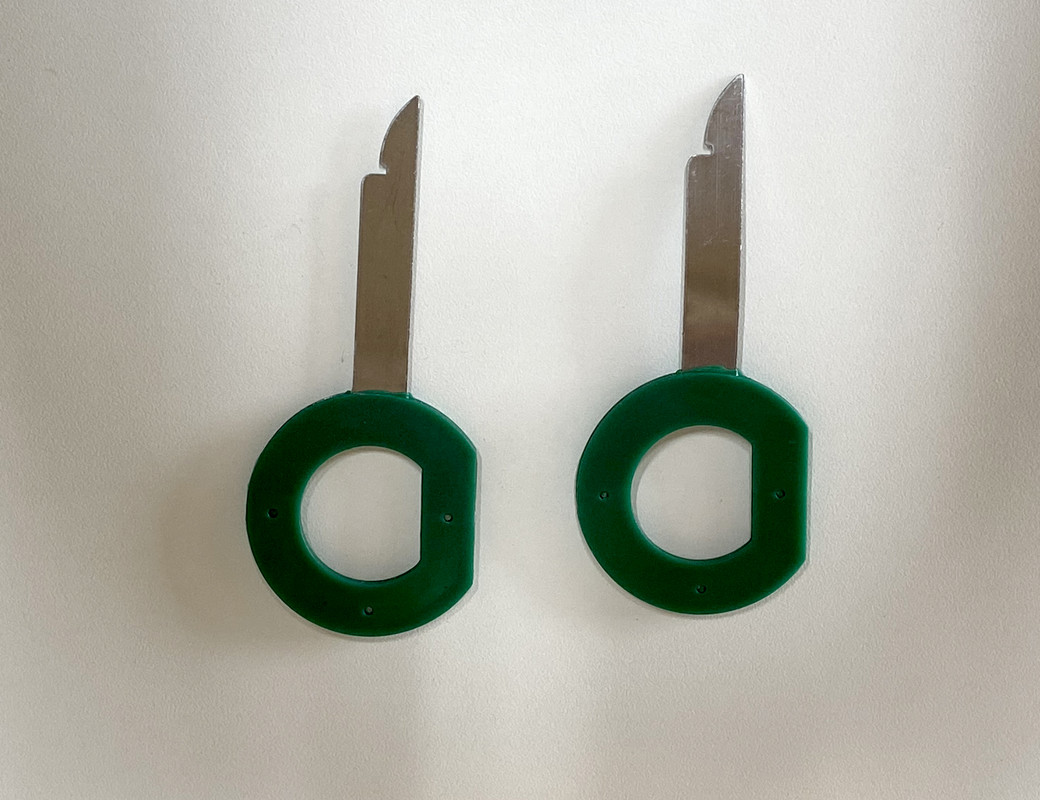 I believe this is the splice harness for the rearview camera. 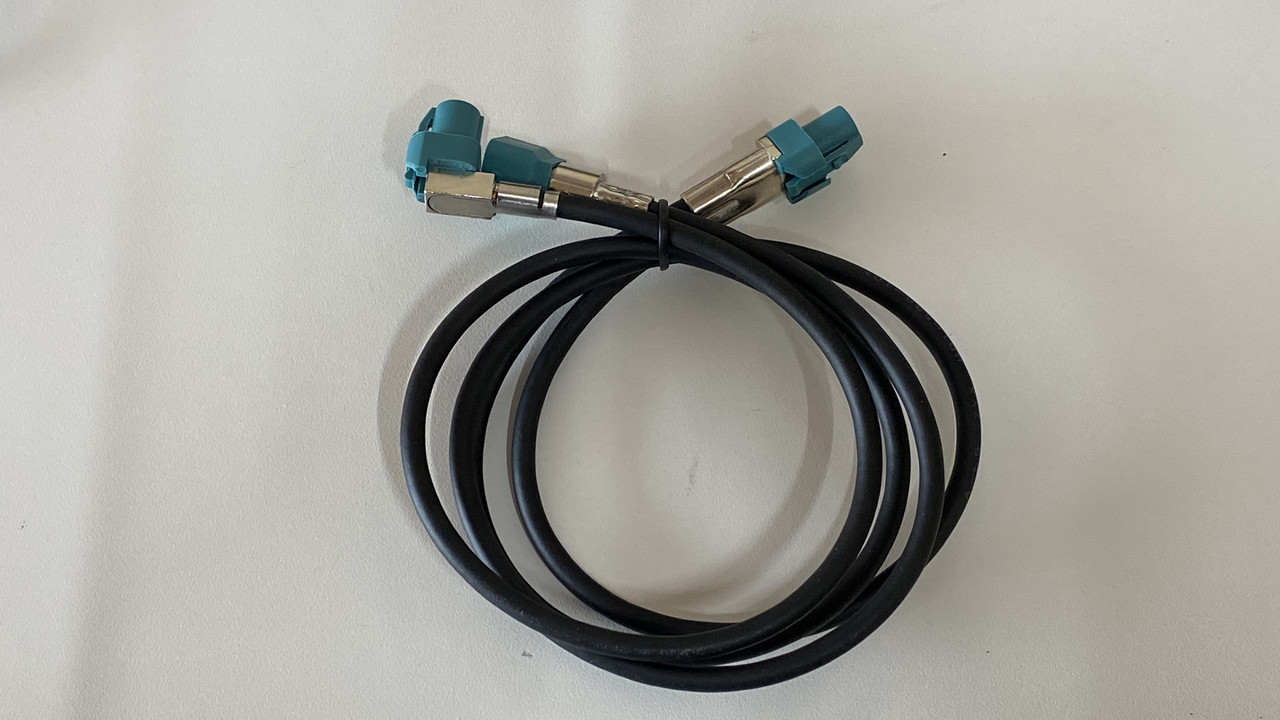 This is the Bluetooth transmitter making it wireless. You basically conceal this somewhere behind the dash where it isn’t shielded by metal. I haven’t gotten that far yet. Want to make sure it’s working before I decide to take the glove box out. With that said, it appears there’s enough room behind and below the MMI for the Carlinkit box and wires. 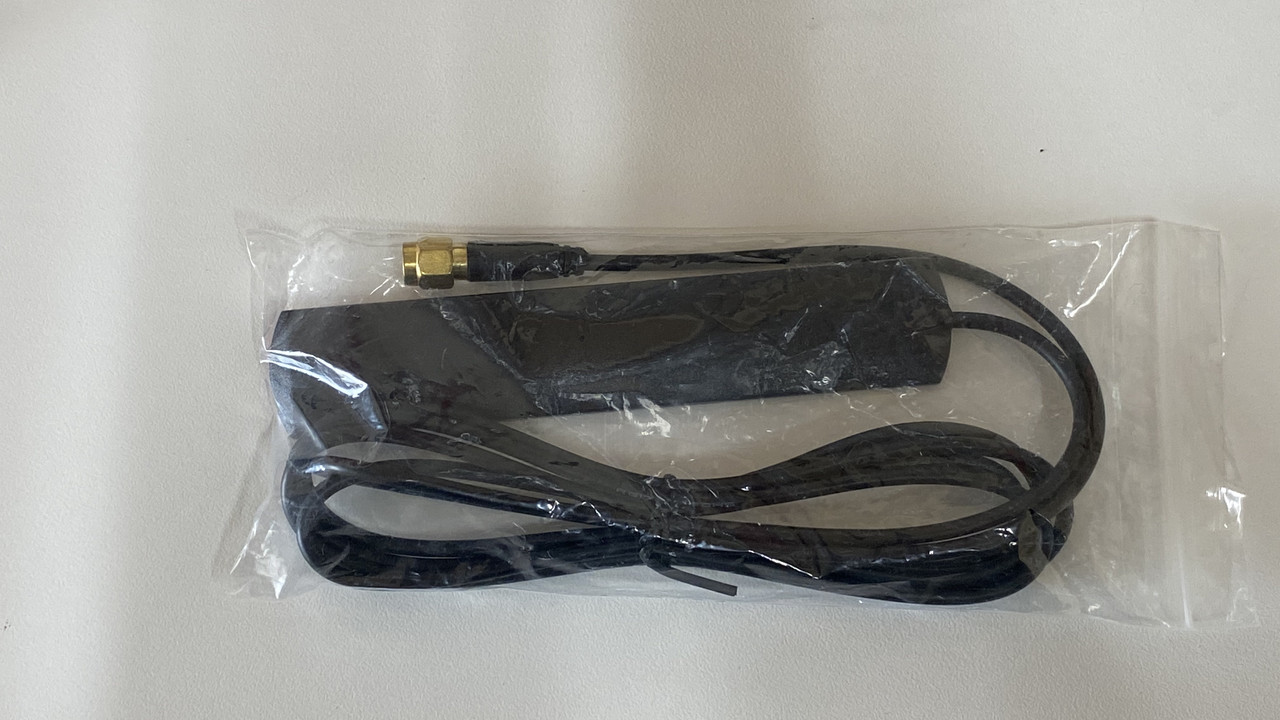 I’ll post updates once I get a reply back from the vendor. Hopefully this’ll work and it’s a nice, cheap alternative stopgap until the new RS Nav units are released.

Phil Miller, from Miller’s Motorsports in the UK was nice enough to send me a quick screen shot of the factory service manual pin labeling diagram for the MMI. 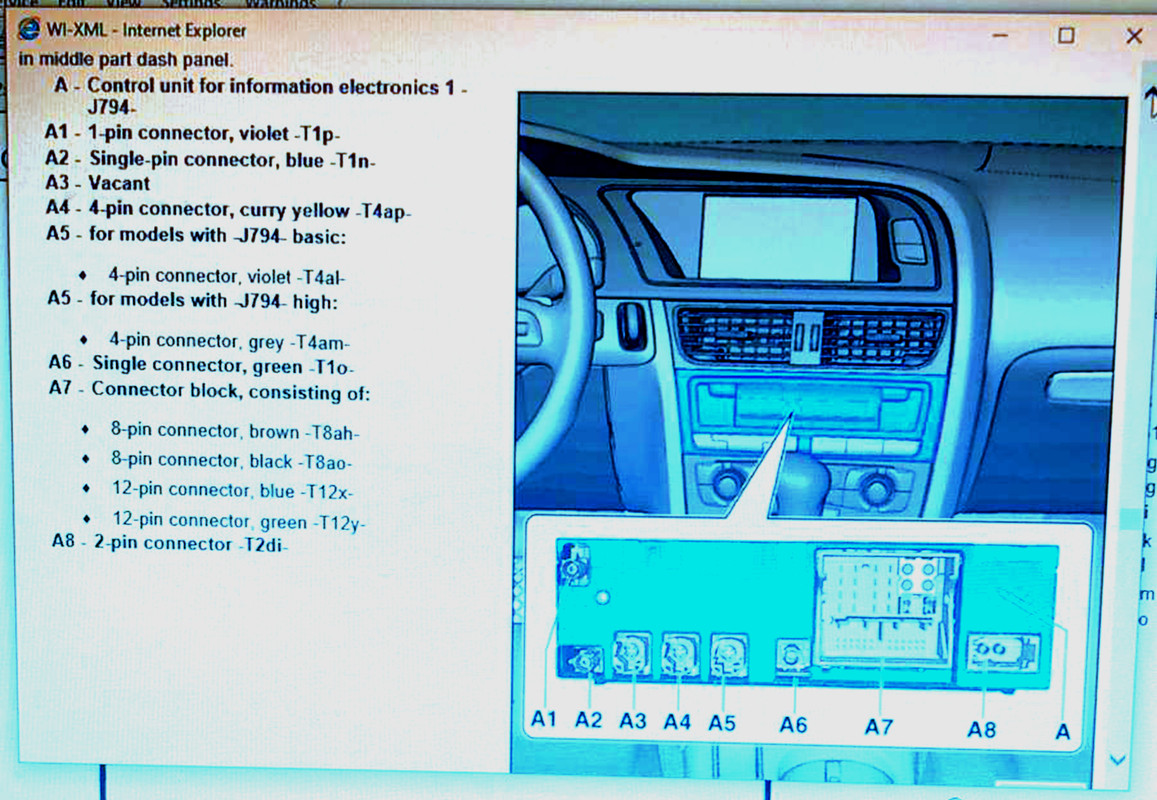 I’m rummaging through the FSM trying to find the corresponding numbers to see what each does.

I’ve had mine in for 18 months and it’s great. Especially with the IOS Apple 13.x update. I’m a big Waze user so holding down the NAV button for 3 seconds and the Carlink loader is presented, select Apple Car Play and press down on the Audi MMI wheel and that’s it. It’s a good upgrade but it does make the Google maps, Audi music and Nav redundant but then it’s an upgrade. Cheers.

So you have this same unit? Did you install it yourself Petere? Did the wiring harness look like mine?
Thanks!
Michel

Ok…getting somewhere now. Haven’t located the exact schematic for my MMI but I’m close.
Here’s a clearer screen grab of the plug/pin numbers on the back of the MMI unit. I’ll label each one as I find them. 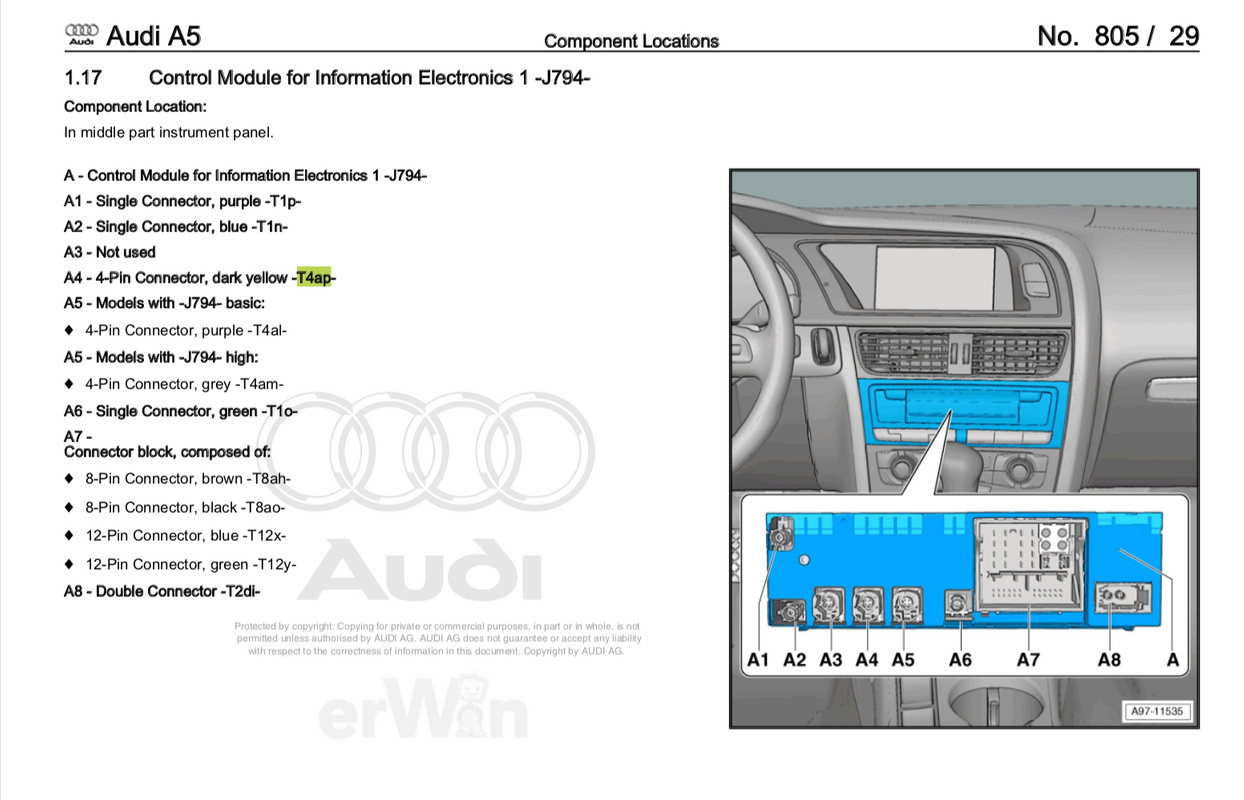 A1 (T1p, purple)-GPS/roof antenna
A2 (T1n, blue)-GPS antenna
A3 (Not used and I don’t have it on mine)
A4 (T4ap, yellow)-External audio source connection, R199, iPod, etc, MOST bus
A5 (T4am, grey)-front information display control head
A6 (T1o, green, not used on my system) CVBS input from TV Tuner
A7 (connector block)-I’ll label the pins separately
A8 (T2dl, two pin)-optical audio interface in and out 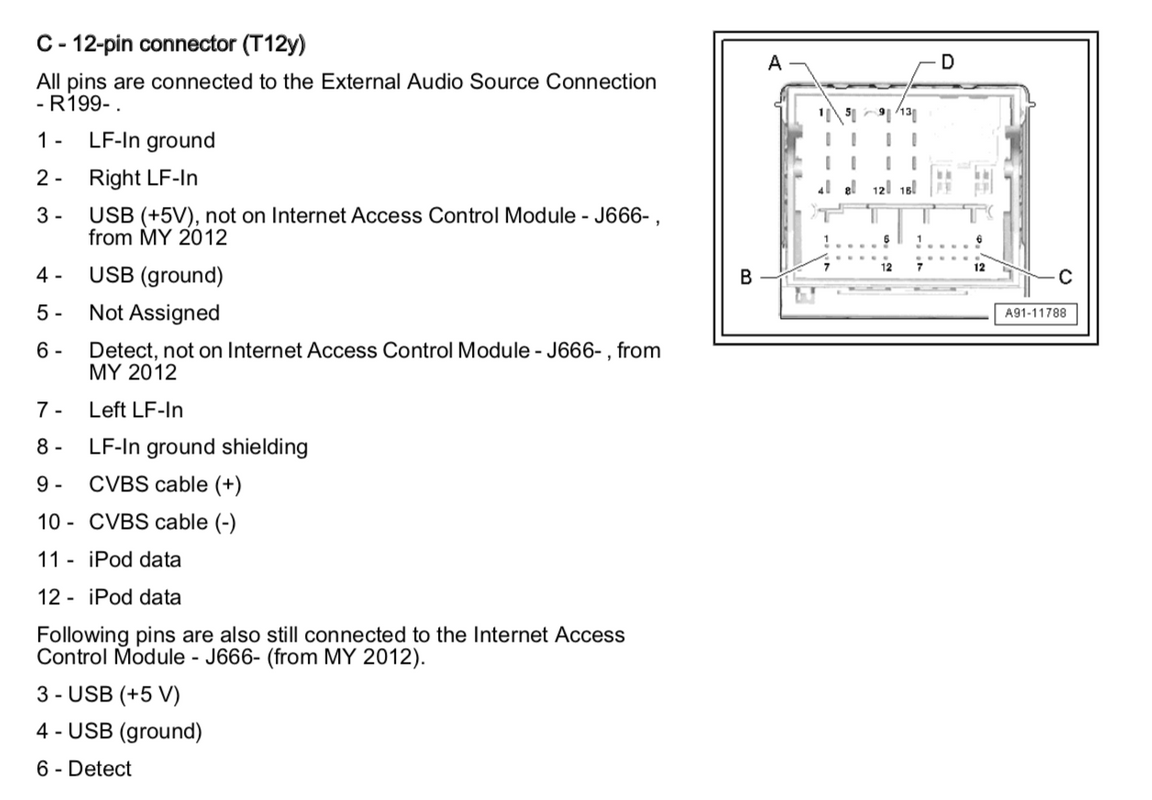 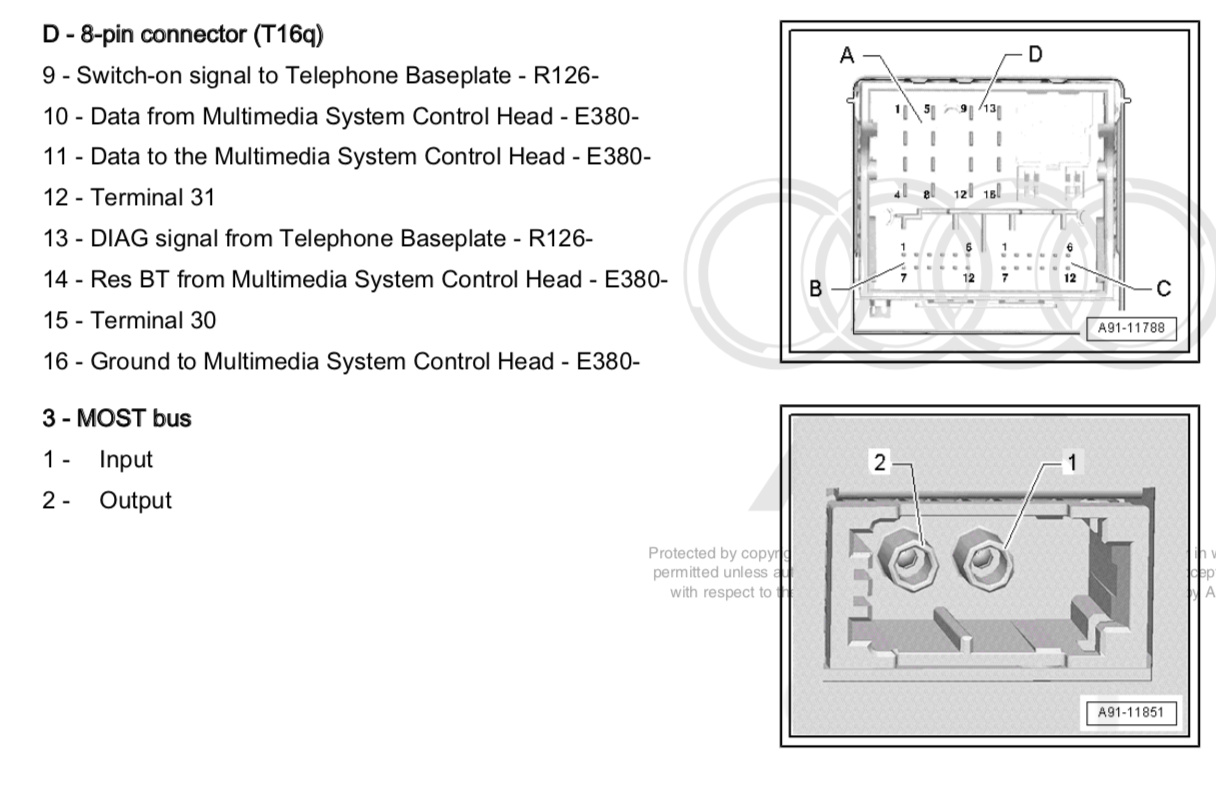 Tore apart the center console after work and figured it out. Really crappy instructions! Short version, it works! It’s brilliant!

The instructions left out that the splice harness also plugs into the climate controls (assuming for power purposes) and the unit now works and works well. I can switch songs with the steering wheel controls which is worth the price of admission alone. No more toggling the controller below the shifter!

I’ll do a full writeup with photos and video shortly. Late. Audi meet and drive tomorrow. Purchase with confidence, it does work on the RS5.

Same, same but a little different. I didn’t install it myself. Unlike you my finishing skills aren’t what they need to be keeping up with the quality of the RS5 build. My installer said the unit installing is quality though but getting them out of China is a problem at the mo.

I was able to get mine in about seven days but yes, with the coronavirus epidemic, things are moving a bit more slowly.

I have two issues. When using Apple (or Google) maps, I don’t get a voice prompt, turn by turn instruction. And when someone calls me, can’t hear the caller. I did not turn off the bluetooth per the instructions as music streaming was working fine without doing that. Going to do a bit of research to see if that’s the actual solution.

Other than that, it works and sounds great. No perceivable audio quality loss when streaming music.

Ok figured everything out last night, I now have voice guidance with maps and phone calls. This is a pretty good and inexpensive solution for adding CarPlay. Yeah, the screen is small but I really don’t find that to be a real hindrance honestly. But everything is working as it should. Full installation and setup blow by blow shortly.

Are you still going for the full install guide on this, I keep looking at the 10" RSNAV screen but if similar functions can be achieved from this then I’d probably go down the same route.

James! I am. That’s actually my next video! Will start working on it today.

Nice video. Thank you for the install tips. That seems pretty painless.

Nice video. Thank you for the install tips. That seems pretty painless.

LOL, the Kool Aid tastes good though! Most welcome and yes, fairly painless installation. Setup is the hardest part. Need to remember to select auxiliary in the menu, turn off factory bluetooth, and have an accessory cord plugged into the auxiliary port in the glovebox but nothing plugged into the accessory port.

@Ape_Factory - I cannot for the life of me get everything behind the dash. Do you happen to recall exactly where that box sat behind the dash as well as the CAN extension? I pushed the box to the bottom and pushed the CAN harness up and no dice! Any advice appreciated!

Hey I know I already replied on YouTube but I’ll reply here as well…Yes it’s a tight fit. If for some reason you cannot get the main box low enough and the harness pushed to the back, your other option is to remove the glove box and place everything on top of it. Tons of room.

I also keep the Bluetooth antenna down below the climate control panel on the outside. It’s just sort of sitting there, can’t really see it and I haven’t even felt the need to secure it with the double sided tape as it’s so light it doesn’t go anywhere or shift in any way.

Hey Michel , texted you but I figure it’s better to ask here for everyone’s knowledge, 2 questions.

Hey Randy! I didn’t get the text!

Anyway…yes, plays nice and the factory camera plugs right in.

For an RS5, just plug in the cable, no coding needed. If someone has an S5 or another compatible vehicle where the aux is NOT enabled, they’ll have to go into the green screen and turn it on . Getting to the green screen requires a VCDS or something like a Carista.

Is this the cable - https://www.ecstuning.com/b-genuine-volkswagen-audi-parts/35mm-auxiliary-adapter-cable/4f0051510t/

That’s it BUT the CarPlay kit comes with a cable so no need to purchase an extra one.