Recently I’ve been getting an intermittent EPC/limp mode fault that happens maybe once every 100km/10 starts. Here are the collection of codes that pop up over the course of multiple scans:

Coincidentally, I had no problems until immediately after I used some RTV to seal a leak/whistling sound from passenger TB to the Y-intake. This was at the lower front bolt holding right next to the TB electrical connector. (see: Whistling at idle). The RTV has since been replaced by a new TB gasket (although the old one looked fine).

The same codes popped up 3 years ago, at which time I believe the TB and cam solenoid valve were tested by my mechanic with a 12V battery and seemed to be operating correctly. He cleaned the electrical connectors a couple times, and also added a zip tie to secure the TB electrical connector because I believe a clip was broken. That seemed to fix the problem until now.

The problem is intermittent, and during this covid19 lockdown, I can’t seem to trigger it on short drives. But is there anything else I can do to diagnose this problem with certainty?

Also, can someone confirm the location of Throttle Position Sensor B (G188), Throttle Actuator (J338), and “B” Camshaft Position?

It happened again yesterday, but I noticed that these codes often occur when my battery has dropped down to 5% (from no activity). Is there any chance that they are related?

Yes as the ECU drives the 02s the throttle body and coil packs to some degree. The ECU voltage will not allow some things to take place.

I just picked up my car after getting the front crank seal replaced. Fingers crossed this will stop the oil drips in the garage. But these codes popped up again:

Can someone confirm the actual location of the Bank 2 - “B” Camshaft Position solenoid? I’m looking at the cam solenoid behind the PS tank and I can definitely see a cracked electrical connector. Is that the cam solenoid that is screaming for attention? 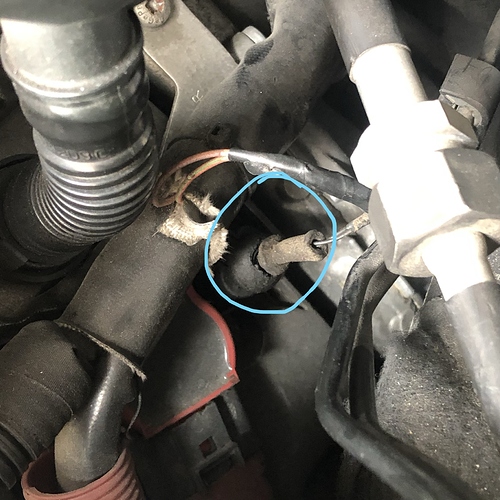 I’m going through my old posts, and here’s a link the the fix from 2016: Whats the correct PN for the camshaft solenoid valve?

Same problem, but now these codes are no longer intermittent.

I had a bunch of engine work done to seal an oil leak and replace old cooling parts. Also:

I drove about 1500KM in a pair of road trips and everything was perfect. The engine ran strong and very smoothly with no codes. Then I dropped the car off for a final wheel alignment. (Why?) When I got it back, these codes popped up and won’t go away. (Engine sometimes idles roughly on startup, but still runs fine)

Strangely, I also had an unexplained, low-battery problem after I cleared the code the first 2 times. Got a battery jump the first time, and just let the battery regulator shutdown the 2nd time (waited ~2 hours)—and the car started just fine. Both times, the battery level reported at least 70%.

My mechanic is puzzled, but said he didn’t touch anything in the engine compartment. (Maybe a weak battery problem?)

Open to suggestions, but I have to do something quick. I’m supposed to ship the car in 2 days, and I’m worried that I won’t be able to register in a new country with the CEL on.

That’s a relief, because there will be no time to get this fixed before it is shipped.

But the bigger issue is that I suspect “B” Camshaft Position / Bank 2 is the Driver Side EXHAUST camshaft solenoid. This solenoid was already swapped with the passenger side, so that tells me that the solenoid is not the problem. That means it must be the wiring, but the 2-pin connector to the Driver side EXHAUST solenoid has also been replaced. So how do I trace this electrical fault?

I seem to have determined that this CEL appears only on cold starts. If I clear the faults when the motor is already warm, it doesn’t come back right away. But cold starts are a little rough at first.

Were any of the connectors damaged when the work was done?

The damaged connector in the photo above is Dr-side exhaust and was replaced with a new 2-pin connector. I believe they cut the wire and soldered. The solenoid was ALSO swapped with the pass-side exhaust solenoid. Since the fault did not move (bank 2 “B”?) the fault is still electrical?

If it was the sensor you would expect it to move.

They didn’t crimp any wires with a connector to join them?

Normally you would push out the old pins and insert them in the new connector. Are you sure they did not do that? Also did you look at the end of the connector to make sure the pins are all the way set?

Have you tested HPFPs yet?

not yet. But would the HPFPs have an impact on the cam solenoid faults?

I’ll be watching this pretty close - I just started a thread about a similar code relating to cam solenoid. I recently resoldering some wire into mine because it was heavily frayed so that will be the first place I start. Not sure about the HPFP correlation though.

I can’t do anything now because the car is still in transit––apparently the cargo ship will arrive in Hamburg tonight, but I’m not sure of the final destination.

Regardless, I had the same problem with the wiring on the driver side, and I had my mechanic solder in a pair of new 2-pin connectors. Unfortunately, the code still fired. I’m wondering if I should check the pin-outs at the ECU if the problem persists.

Does anyone have pinout info for the other side?